SEOUL, July 11 (Yonhap) -- President Moon Jae-in has appointed two new ministers, the presidential office said Tuesday, but without a formal ceremony amid an opposition protest against some of his other picks for new ministers.

The president electronically approved the appointment of the new minister of science, ICT and future planning, Yoo Young-min, and new minister of gender equality, Chung Hyun-back, according to the presidential office, Cheong Wa Dae. 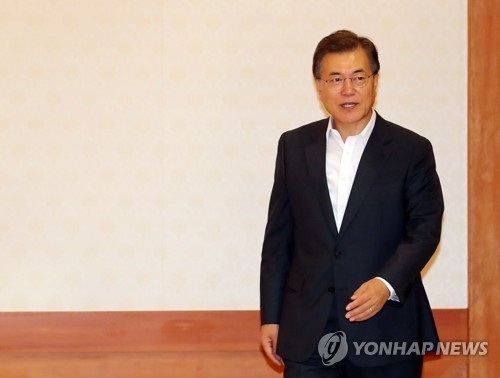 It marked the first time since Moon took office May 10 that he appointed his new ministers without a ceremony.

Normally, the president invites both the new minister and his or her spouse to Cheong Wa Dae for an official ceremony.

Whether or not a ceremony will be held later remained to be seen.

The appointment without a ceremony apparently comes amid opposition objections against some of new minister nominees.

The delay came at the request from the ruling Democratic Party, which cited a need to work with the opposition parties on many issues, including the government-proposed extra budget totaling 11.2 trillion won (US$9.74 billion), according to Cheong Wa Dae spokesman Park Soo-hyun.