"At the Group of 20 summit, all international organizations, including the Organization for Economic Cooperation and Development, diagnosed the global economy as being in a recovery phase," the president said in a Cabinet meeting, according to pool reports.

Moon returned home Monday after his five-day trip to Germany where he attended the annual G-20 summit.

"However, each country must still do their utmost to continue this upward economic trend because, internationally, there remain many uncertainties, such as protectionism," he said.

"I believe our supplementary budget is in perfect accordance with such efforts," he added.

The new government has submitted a bill for a 11.2 trillion-won (US$9.75 billion) extra budget, but the opposition-led parliament has so far failed to act on the government request.

The president earlier insisted the additional spending will help accelerate the country's economic recovery and growth.

"It will be the strength for our economy to escape the (low) growth rate in the 2 percent range," Moon told the Cabinet. 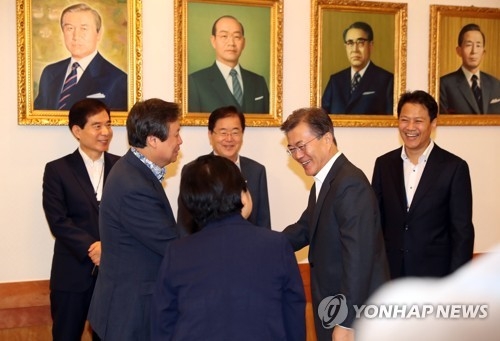 He also urged the National Assembly to quickly approve a proposed reorganization of the government that seeks to establish a new government office for trade negotiations.

"Government reorganization is necessary to implement the new administration's policy initiatives but setting up a trade negotiations office is also an urgent issue, while the United States is calling for a revision of the (Korea-U.S.) FTA," the president said.

The two bills on extra budget and government restructuring have largely been blocked due to a boycott by the opposition parties sparked by their objections to some of the president's nominees for new ministers.

"It is very deplorable that the opposition parties are linking extra budget and government reorganization to personnel or other political issues," the president said.

"We may fall short of expectations in many areas, but basically, we believe personnel issues and the people's livelihoods must be dealt with separately," the Cheong Wa Dae official told reporters.

"Above all, we again ask that the bill on the supplementary budget be discussed at the National Assembly as soon as possible so we can address issues related to the livelihoods of the people," he added.

President Moon earlier agreed to delay his appointment of the two most disputed minister nominees -- Defense Minister nominee Song Young-moo and Labor Minister nominee Cho Dae-yop -- after his ruling Democratic Party cited a need for more time to win the opposition's support for the extra budget, as well as the minister designates.

The opposition parties reacted with an additional accusation, calling it an attempt to "cheat" by publicizing the delay as a concession, and thus forcing them to enact the bills on extra budget and government reorganization before Moon's eventual appointment of his two disputed nominees.

Later, the parliament failed to convene a scheduled plenary session as three opposition parties, including the main opposition Liberty Korea Party, refused to attend it in protest against the president's picks.

The last plenary session for this month is set to be held next Tuesday when the ruling party hopes to pass a set of motions, including ones to approve two Supreme Court justice nominees and a resolution condemning North Korea's latest missile launch.

The ruling party currently controls 120 seats in the 300-seat parliament, the largest number for any single political party but still short of a majority.