SEOUL, July 11 (Yonhap) -- The number of foreigners visiting South Korea could drop by as many as 4.69 million this year, following a diplomatic row with China over the deployment of a U.S. missile defense system here, the state-run tourism promotion body said Tuesday.

During a meeting with local governments and district tourism offices, the Korea Tourism Organization (KTO) said visitor numbers could shrink up to 17.24 million, or 27.2 percent on-year, if the current trend continues until the end of this year.

According to the tourism agency, the number of foreigners visiting South Korea in the March-May period declined 11.2 percent, 26.8 percent and 34.5 percent on-year, respectively.

The number of Chinese tourists plunged 64.1 percent in May compared with the same period last year, marking a drop for three straight months after the Beijing government banned the country's travel agencies from selling Korea-bound package tours. Beijing has opposed the deployment of the Terminal High Altitude Area Defense (THAAD) system in South Korea, claiming it hurts its national security. Seoul has argued the THAAD system is for the sole purpose of countering military threats from North Korea.

The neighboring country's travel restriction, which took effect in mid-March, has dealt a blow to the local tourism industry, which has heavily relied on Chinese demand. Chinese nationals accounted for 46.8 percent of all tourists coming to South Korea last year.

The tourism body said it will focus on boosting programs to attract more local visitors and get foreign foreigners other than Chinese to tour the country. 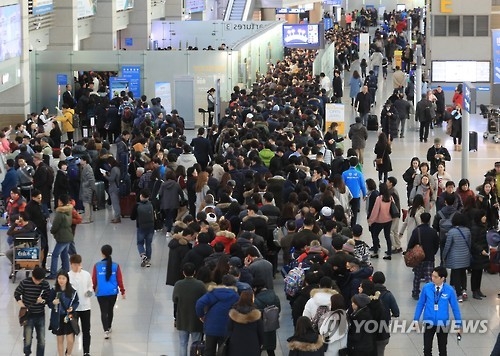