SEOUL, July 11 (Yonhap) -- North Korea has yet to fully secure the development of an intercontinental ballistic missile (ICBM) as it remains unknown whether the country's recently fired ballistic missile successfully re-entered the atmosphere, lawmakers said Tuesday quoting the spy agency.

On July 4, North Korea fired a ballistic missile called Hwasong-14 which reached an altitude of 2,802 kilometers and flew 933 km for 39 minutes. The North touted it as the country's first successful ICBM launch.

But South Korea's National Intelligence Service (NIS) concluded that the latest missile still lacked re-entry technology although it flew as far as an ICBM does, Rep. Yi Wan-young of the Liberty Korea Party and Rep. Kim Byung-kee of the ruling Democratic Party said following the spy agency's parliamentary report on the July 4 launch.

"Although North Korea claimed that (the missile's) heat resistance was verified, whether it re-entered (the atmosphere safely) was not confirmed and the country has no relevant test facility, making it look like it has not secured the technology," the NIS was quoted as reporting to the parliamentary intelligence committee.

North Korea may have not attained the technology to guide a warhead precisely to a target either -- another key ICBM technology -- given that the re-entry technique normally needs to be secured before that, according to the lawmakers.

The July 4 launch appears to be in protest of a summit meeting between South Korea and the United States several days earlier as well as an attempt to thwart the international community's sanctions against the country, the NIS also told the lawmakers.

In the two weeks leading to the launch, North Korean leader Kim Jong-un had not made any public appearances, intensely focusing on the missile progress before he attended the test, the spy agency said.

Quoting the NIS, the lawmakers also said North Korea is capable of conducting a nuclear test at its Punggye-ri site at any time, but there are no signs of an immediate detonation for the moment.

Forecasting the U.S. reaction to the recent missile launch, the NIS was quoted as saying that the country may consider more unilateral sanctions on North Korea, while Russia and China may increase calls to open dialogue with the North.

In the first half of 2017, North Korea carried out 33 foreign affairs activities with 17 foreign countries, the worst performance since Kim came to power, which the agency attributed to North Korea's falling global reputation in the aftermath of its continued missile provocations. 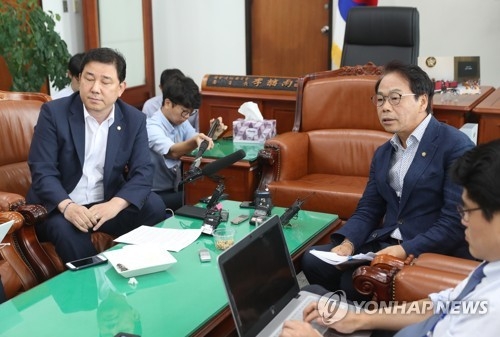