CAMP HUMPHREYS, Gyeonggi Province, July 11 (Yonhap) -- Nestled in the seaport city of Pyeongtaek, Camp Humphreys symbolizes American troops' landmark transition not just in its decades-long presence on the peninsula but also in efforts to become nimbler and more reliant on high-tech combat systems.

After a decade of delay, the expansion of the compound is finally on the fast track, highlighted by the relocation of the Eighth Army, the backbone of the U.S. Forces Korea (USFK).

"The $10.7-billion-dollar project dramatically increased the size of U.S. Army Garrison Humphreys, making it the largest U.S. Army garrison overseas in the Department of Defense," Lt. Gen. Thomas S. Vandal, commander of the Eight Army, said during a ribbon-cutting ceremony. "Undoubtedly, the installation is the crown jewel of overseas installations in the Department of Defense."

He described his unit's move here as a "milestone" in the USFK's transformation and the Seoul-Washington alliance that dates back to the 1950-53 Korean War. 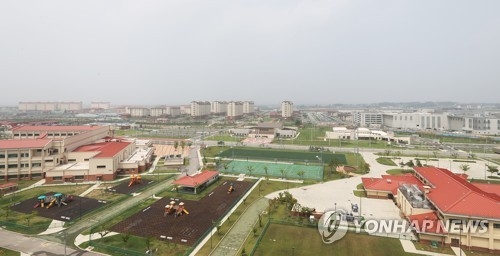 It marked the end of the Eighth Army's 64-year presence at the Yongsan base in central Seoul and the start of its footprint at this sprawling garrison some 70 kilometers south of Seoul and quite close to China.

The commander introduced Camp Humphreys as the operational hub of the 28,500-strong USFK, with another base in the Daegu-Busan area working as the logistics hub.

The USFK has been expanding Humphreys under a 2004 deal with South Korea to consolidate more than 170 bases and other installation across the country into the two hub compounds. It has since been closing many of the bases, including those near the inter-Korean border.

The decision reflects the USFK's push to reduce dependence on front-line troops, formerly considered a "tripwire," and transform itself into forces depending more on air and maritime power and nimble ground forces.

The USFK has also sought to improve its "Fight Tonight" capability with cutting-edge systems, especially the so-called C4I -- command, control, communication and intelligence -- as those in small and old bases were outdated, according to Vandal.

He was confident that the transition will help bolster the USFK's combat readiness despite concerns that it may leave the front-line defense vulnerable.

Initially, the bulk of U.S. forces here were supposed to be relocated to Humphreys in 2008 but the move was delayed until 2012, then to 2016 as the USFK pushed for "conditions-based" relocation linked to progress in construction and the establishment of the C4I and other crucial systems.

Vandal said 80 percent of the construction is complete and the rest is expected to finish within the next 12 to 18 months.

Some facilities including a small arms range and a fuel storage facility were seen still under construction.

South Korean defense officials hope that the relocation will finish by next year but the commander put the timeline at 2020.

"Once complete in 2020, the transformation will reflect the enduring commitment of both the ROK (South Korea) and U.S. governments to this great alliance," he said. "It will also greatly enhance our quality of life, our force protection and ultimately - our readiness to fight tonight." 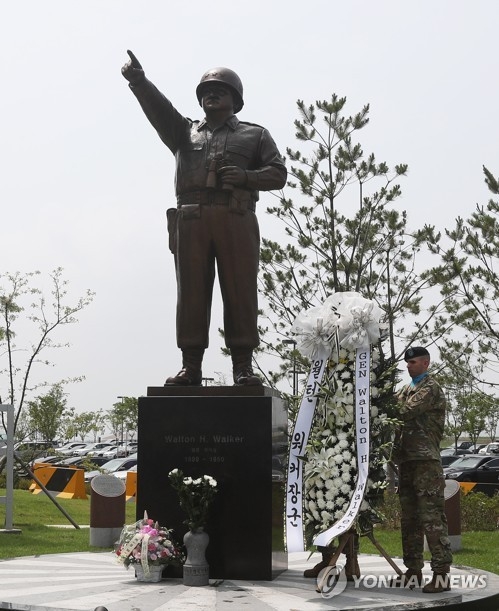 It also boasts a 2-kilometer-long runway for C-130 transport planes and other aircraft excluding fighter jets. CH-47 Chinook helicopters and AH-64D Apache choppers sit next to it.

Humphreys will serve as home to more than 40,000 service members and their families.

"It shows we, the Eighth Army, are here and (the USFK's) transformation is truly under way," she said. 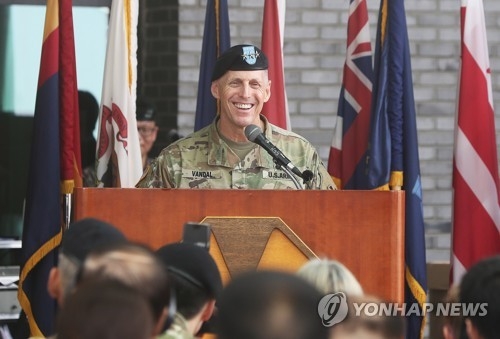 In the ribbon-cutting event, meanwhile, a 10-foot-tall bronze statue of Gen. Walton H. Walker, a late Korean War hero, was unveiled. It was moved to the Eighth Army's new home from the Yongsan Garrison.