The TR-60 can be used for surveillance, as well as search and rescue operations at sea.

KARI said the takeoff and landing marks a milestone since UAV operations are notoriously difficult on ships due to wake turbulence caused by the ship's superstructure.

"This trial flight confirmed the possibility of the TR-60's flight from the vessel," said Oh Soo-hoon, a KARI official, adding that the unmanned tiltroter will be further used for other purposes, such as illegal fishing monitoring in South Korean waters.

Currently, only a couple of countries, including the United States and Israel, have effectively mastered tiltrotor technology.

KARI developed the TR-100 UAV in 2012, the second such aircraft in the world after one made by the United States. 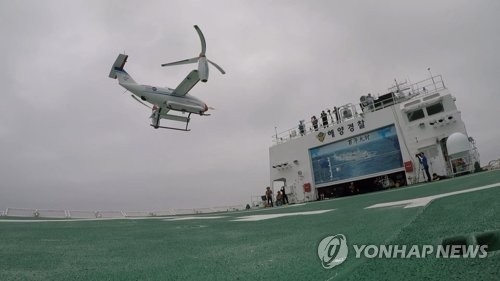