SEOUL, July 11 (Yonhap) -- Actor Im Si-wan, who also is a member of ZE:A, joined the Army on Tuesday, becoming the fifth member of the nine-member boy group to begin mandatory military service.

He entered a boot camp in Yangju, just north of Seoul, to receive five weeks of basic training. Hours before entering the camp, he had a brief event at a nearby venue to say goodbye to his fans. About 200 fans gathered there to see him off. 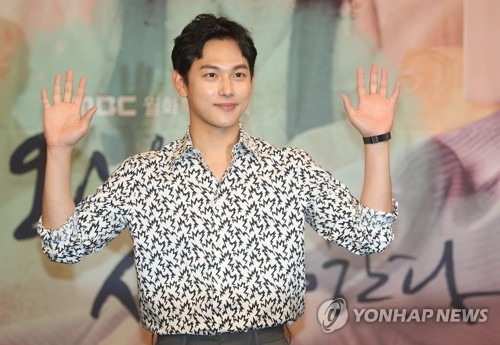 "I got a hair cut today," Im said during the event. "I feel like I have done my long-delayed homework. I'll be back safely," Im said.

Debuting as a member of the popular boy band ZE:A in 2010, the 28-year-old star has appeared in various TV series and films such as "The Moon Embracing the Sun," "Misaeng (Incomplete Life)," "The Attorney," "A Melody to Remember" and "One-Line." In May, he was invited to an out-of-competition category of this year's Cannes Film Festival as co-star of the new crime-action film "The Merciless."

All able-bodied South Korean men are required to complete about two years of military service.