SEOUL, July 11 (Yonhap) -- A Seoul court was set to make a decision on the prosecution's request for an arrest warrant for a former senior member of the minor opposition People's Party on Tuesday over his suspected role in fabricating evidence used in a negative campaign against President Moon Jae-in during the May presidential election.

Lee Jun-seo, then a supreme council member of the party, is accused of violating the election law by providing the party with unverified information about an illicit hiring of Moon Joon-yong, the president's son, by a public agency in 2006.

"It is regrettable that I had limitation in verification though I did my best. And I'm not involved," he told reporters earlier in the day as he appeared at the Seoul Central District Court for a hearing on his arrest warrant.

In the lead-up to the May 9 election, the People's Party and its candidate Ahn Cheol-soo raised an allegation that the junior Moon landed a full-time job at the Korea Employment Information Service based on his father's influence as a presidential secretary.

The prosecution has arrested Lee You-mi, a former campaigner for Ahn, after she confessed to doctoring the tip-off. She said she had her brother pose as a friend of the junior Moon and make the revelation in an audio file, which she later relayed to Lee Jun-seo via a mobile messenger. Lee You-mi has insisted she didn't act alone.

The prosecution believes that Lee Jun-seo, 40, delivered the information to the party's leadership panel knowing that the evidence was made-up. He has denied any wrongdoing.

The scandal has driven the People's Party to its worst crisis since the party launched early last year, clamoring for "new and clear politics." The party conducted its own probe soon after the scandal broke and concluded that its top officials were not involved in the scheme. 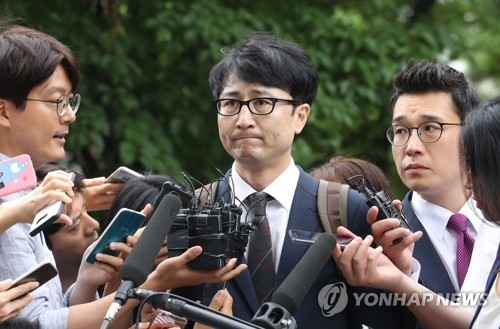