The Seoul Central District Court approved the prosecution's request for a warrant to detain Lee Jun-seo, upholding its claim that he may destroy evidence and is a flight risk. His arrest is expected to spur the investigation into whether any other party leaders were involved.

Lee didn't answer a barrage of questions from waiting reporters as he emerged from the prosecutors' office before being whisked away in a car to the Seoul Detention Center.

In the lead-up to the May 9 election, the People's Party and its candidate, Ahn Cheol-soo, raised an allegation that the junior Moon landed a full-time job at the Korea Employment Information Service based on his father's influence as a presidential secretary.

The prosecution arrested Lee You-mi, a former campaigner for Ahn, after she confessed to doctoring the tip-off. She said she had her brother pose as a friend of the junior Moon and make the revelation in an audio file which she later relayed to Lee Jun-seo via a mobile messenger.

The court, however, rejected an arrest warrant for Lee You-mi's brother, saying that in light of the degree of his suspected involvement and his attitude during the investigation, he is unlikely to destroy evidence or flee. 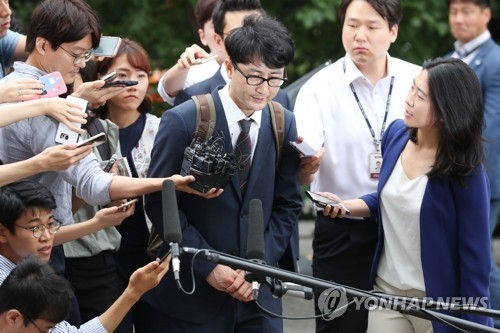