SEOUL, July 11 (Yonhap) -- South Korea's spy agency plans to investigate 13 past controversial cases, including agents' suspected involvement in domestic politics, as it seeks to end interference in political affairs, its chief was quoted as saying by lawmakers on Tuesday.

The move comes as liberal President Moon Jae-in is seeking to reform the National Intelligence Service (NIS) to prohibit the agency from intervening in domestic politics and make it focus on overseas operations.

"If there are cases requiring probes, we have the willingness to zero in on them beyond the political spectrum of an administration," Suh Hoon, new director at the NIS, was quoted by lawmakers as reporting to the parliamentary intelligence committee.

Last month, the NIS set up an in-house reform committee with two task forces under its wing charged with investigating the agency's illegal intervention in domestic politics and overhauling its organization. 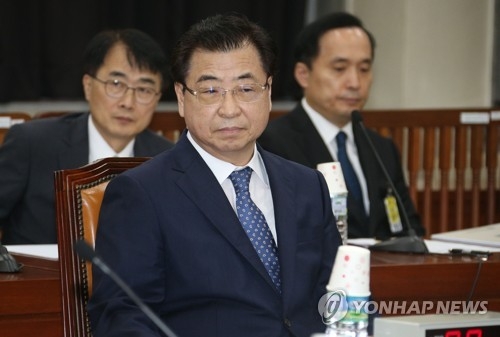 The cases to be under scrutiny include the agency's online smear campaign ahead of the presidential election in 2012 and its release of a transcript of a 2007 inter-Korean summit.

Some NIS agents were suspected of being mobilized to post online comments to sway public opinion in favor of the then-ruling conservative party ahead of the 2012 vote. Moon was defeated by then-conservative candidate Park Geun-hye.

In 2013, the NIS unveiled a transcript of a 2007 inter-Korean summit, during which late former liberal President Roh Moo-hyun called for changing the disputed de facto western sea border with North Korea into a "peace economic zone."

There was criticism that the spy agency divulged state secrets to divert public anger away from a scandal involving then-spy chief Won Sei-hoon, who allegedly ordered the online smear campaign against Moon during the 2012 election.

The ruling party stressed that the spy agency's task force should meticulously look into the 13 cases to overhaul the NIS.

But opposition parties said that the move is feared to serve as "political revenge" as most of the cases took place over the nine years under Moon's two conservative predecessors.