SEOUL/PAJU, July 11 (Yonhap) -- A 108-kilometer, 100-minute drive found Hyundai Motor Co.'s subcompact sport-utility vehicle Kona unique among rivals in its class in terms of distinctive looks, a composed ride and top-of-the-line safety features, a good starting point for a vehicle that the carmaker is pinning high hopes on.

In a mix of urban and expressway driving on roads west and northwest of Seoul, the Kona SUV excelled in key basics such as acceleration, braking, and cornering as well as having a solid ride with the prerequisite low noise and vibration levels.

Among such attributes, Kona's safety features, in particular, stood out from the small SUV crowd.

In the Kona, the driver can enjoy advanced safety features that are not easily found in mainstream cars such as head-up displays, rear-side collision avoidance system and high beam assist. Its main rivals that range from Renault Samsung Motors Corp.'s QM3 to SsangYong Motor Co.'s Tivoli do not have such features with drivers having to do with lane departure warnings and frontal crash avoidance systems. 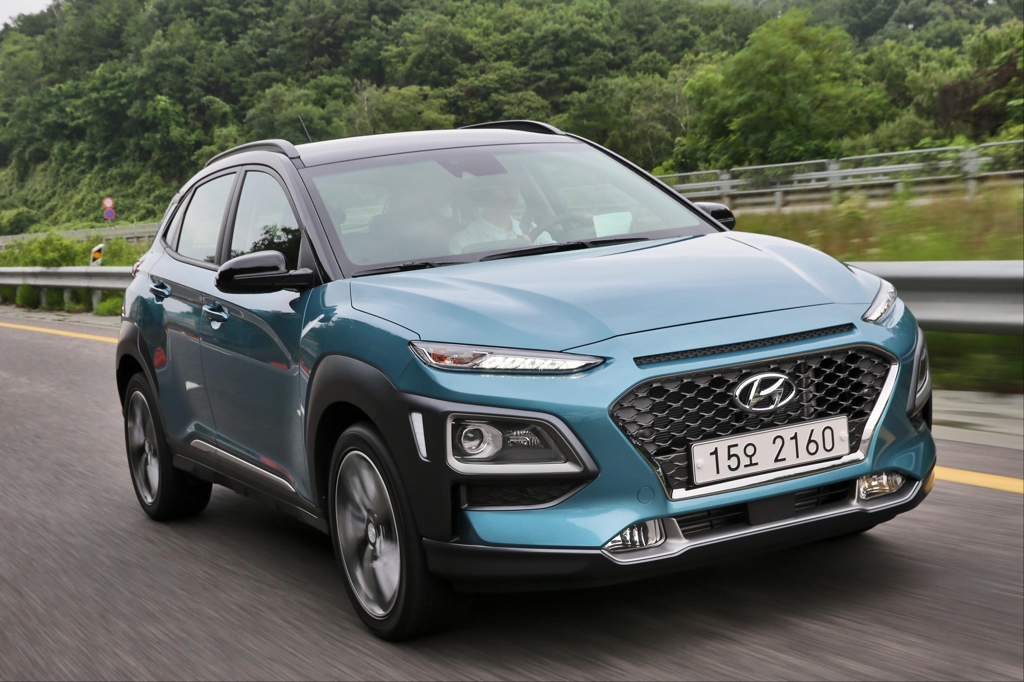 In addition to safety, the Kona is roomy enough for four adults and is quieter than both the QM3 and Tivoli SUVs at speeds reaching 140 kilometers per hour. The car has a rear parking assist system that further boosts overall convenience.

The roominess and safety features appear to be a strong selling point in overseas markets, given it is Hyundai Motor's first foray into the small SUV segment that is very popular in places like Europe.

On the fuel economy front, the new car proved very competitive. After 45 minutes of driving on "eco" mode with the speed set at 90 kph, its dashboard showed an average fuel economy of 14 kilometers per liter of gasoline, which is good for a car with a high seating position and poor aerodynamics compared to sedans.

Hyundai said the Kona sold in its home market comes with either a 1.6-liter gasoline turbo engine or a 1.6-liter diesel engine. The car has a seven-speed dual clutch transmission that sends power to the front or to all four wheels depending how the car is configured.

Faced with slowing sales in China and the United States, Hyundai is stepping up efforts to diversify its SUV lineup by launching a variety of models, with the Kona being a clear statement of intent to meet consumer demand for crossovers and try to draw in more customers, in the wake of weak sales.

In the January-June period, Hyundai sold a total of 2.2 million vehicles globally, down 8.2 percent from 2.4 million units a year earlier.

Hyundai plans to start the production of the Kona for exports to Europe and the United States at its domestic plants in August and December, respectively.