Lt. Gen. Thomas S. Vandal, commander of the Eighth Army, was responding to controversy over the location of the THAAD battery installed in Seongju, some 300 kilometers southeast of Seoul, against North Korea's nuclear and missile threats.

The USFK has turned a former golf course there into a new base for a THAAD unit. Two interceptor launchers are in place along with the powerful X-band radar and some other equipment. But four other launchers remain stored at a nearby American military compound due to the ongoing review of the scope of joint environmental impact assessment.

Vandal said the USFK has closely collaborated with South Korea's defense ministry on the selection of the site, instead of deploying it at an existing USFK base like Camp Carroll just north of Daegu. 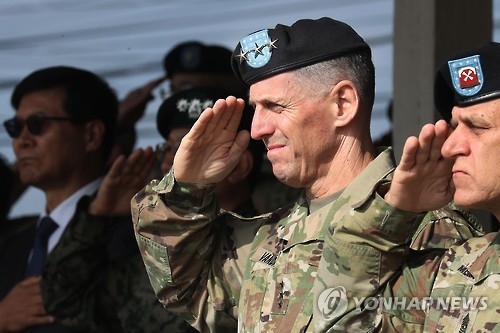 He added that THAAD also protects key facilities in the southern area including ports in Busan.

Vandal said the two sides took into account "various factors" in selecting the site including environmental concerns and political considerations.

He acknowledged that Camp Humphreys, the USFK's new flagship installation located relatively far away from Seongju, may be a prime target of the North's possible missile attack.

But the USFK will be able to defend the garrison with Patriot missiles, which provide a "point defense."

THAAD, in contrast, is for "area defense," which means the allies would need a lot of Patriot missiles to cover the southern region without it, he pointed out.

Earlier in the day, the Eighth Army held a ceremony to open its new headquarters at Camp Humphreys, ending a 64-year stay at the Yongsan base in Seoul.