SEOUL, July 11 (Yonhap) -- The justice minister nominee said Tuesday that if appointed, he would sternly deal with any wrongdoings involving conglomerate owners and their families, and unfair practices by franchise business leaders.

In his answers submitted to the National Assembly ahead of his confirmation hearing slated for Thursday, Park Sang-ki also said he would push for the installation of an investigation office targeting corrupt government officials, a key campaign pledge by President Moon Jae-in.

"I will seek to set clear standards to punish any crimes that chaebol families may commit to pursue private interests such as embezzlement and dereliction of duty, and ensure that they will face corresponding penalties for them," he said. 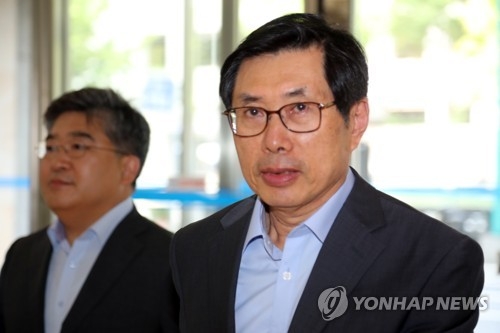 His remarks came amid the Moon administration's reform efforts to improve local business giants' governance structure for transparency and fair competition, and keep wealth from being concentrated too much in large family-run conglomerates.

Touching on franchise businesses, some of whom came under fire for alleged mishandling of subordinate partners, the nominee floated the idea of establishing a prosecutorial office in charge of fair trade.

"Unfair practices (by some franchise business owners) have undermined social integration, economic efficiency and in the long term, they will get in the way of our efforts to create jobs and bolster growth," he said.

The founder of a major pizza franchise was arrested last week over suspicions that he ripped off contractors and embezzled company funds. His reported mistreatment of franchises has sparked public uproar.

Park also pledged to make efforts to ensure that Choi Soon-sil, who was at the center of a corruption scandal involving former President Park Geun-hye, will forfeit any profits she obtained through illegal activities.

Choi, Park's confidante, is known to have exploited her decades-long ties to gain financially. Park is suspected pressuring big conglomerates into making large donations to two foundations controlled by Choi.

The nominee, in addition, noted the need to improve the current law school program. Critics say the program, introduced in 2009, is too expensive for low-income aspiring lawyers, while its admission process also needs more transparency.