WASHINGTON, July 11 (Yonhap) -- The Senate-proposed U.S. defense budget bill for next year calls for further strengthening the alliance with South Korea, including through the deployment of the THAAD missile defense system, congressional records showed Tuesday.

The National Defense Authorization Act for Fiscal Year 2018, which was introduced by Sen. John McCain (R-AZ), chairman of the Senate Armed Services Committee, on Monday, has a section devoted to the "importance of alliance" between the U.S. and the South.

Last year's bill had no such section.

"It is the sense of Congress that, in order to achieve the peaceful disarmament of North Korea, the United States should reaffirm the commitment of the United States to defending our allies in the region, including through the deployment of a Terminal High Altitude Area Defense (THAAD) battery to the Republic of Korea," the bill said.

The legislation also reaffirms the commitment to provide extended deterrence, "guaranteed by the full spectrum of United States defense capabilities, including conventional capabilities, missile defense, and the nuclear umbrella."

The legislation has a similar section about the relations with Japan. 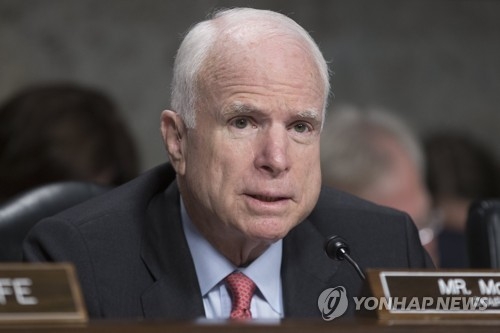