WASHINGTON, July 11 (Yonhap) -- The United States continues to look into a so-called secondary boycott of North Korea to starve the communist nation of resources to develop its nuclear and missile programs, the State Department said Tuesday.

North Korea is under a wide range of sanctions for its missile and nuclear tests, and is expected to face stronger punishment for its intercontinental ballistic missile launch last week.

"We are willing to look at third-party sanctions and look at other nations and sanction them if they are involved in activities that help give money to the DPRK," department spokeswoman Heather Nauert said during a regular press briefing, referring to North Korea by its official name, the Democratic People's Republic of Korea.

She noted Washington issued sanctions against Chinese entities last week. Such sanctions, known as a "secondary boycott," are designed to cut off money to the North.

"The United States continues to look at those as ways to try to shut down the money that is illegally going to North Korea, that we believe -- we firmly believe -- that it goes to fund its illegal weapons programs."

Nauert stressed China's "unique leverage" in dealing with Pyongyang and urged Beijing to do more to rein in the recalcitrant regime.

"We have continued to have conversations with Chinese government officials at all levels, at the highest levels, and we continue to say 'Thanks for what you've done but we expect, and we want, you to do a whole lot more.'"

On Washington's push to draw up a new sanctions resolution against Pyongyang at the U.N. Security Council, she quoted U.S. Ambassador to the U.N. Nikki Haley as saying that the response should be "proportionate."

"The world is very concerned about the escalation in terms of the threat" posed by North Korea, she said. 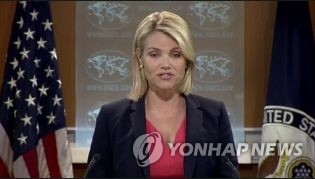