SEOUL, July 12 (Yonhap) -- Former major league pitcher Hector Noesi has been the most dominant starter in South Korea so far this year -- not simply because he has overpowered hitters but because he has relied on his considerable smarts and guile.

As the first half of the 2017 Korea Baseball Organization (KBO) season nears its end, Noesi, right-handed ace for the Kia Tigers, leads all hurlers with a perfect 14-0 record. He won his 14th game Tuesday against the NC Dinos to tie the KBO record for most consecutive wins by a starter from the start of a season.

Dating back to last season, Noesi has now won 15 straight games, the longest such streak by a foreign pitcher since imports were allowed in the KBO in 1998.

The 30-year-old Dominican Republic native was 15-5 in 31 starts in his first KBO season last year. Noesi is now on pace to set a KBO record for most wins by a foreign starting pitcher in one season. Dustin Nippert of the Doosan Bears set the mark in 2016 with 22 victories. 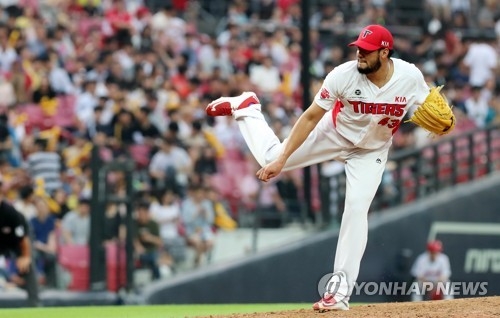 While the strikeout total may not jump out, Noesi has been getting it done by keeping hitters off balance with an array of pitches. Hector can throw his fastballs at over 150 kmh (93 mph) and has an excellent command of his changeups, curves and sliders.

Cha Myung-suk, former pitcher and now a TV analyst, said Noesi has been "an extremely difficult pitcher for hitters to figure out."

"Hector has been fooling hitters with two types of curves; he can throw them fast or slow," Cha said. "As far as managing games and changing speeds, he has been brilliant. Nippert may be a harder thrower, but Hector may have a higher baseball IQ."

It also has helped that the Tigers have given him plenty of offensive support, having scored 9.41 runs per Noesi's start. The Tigers are ranked first in the KBO in batting average (.310), runs scored (573), hits (926), total bases (1,436) and batting average with runners in scoring position (.344).

"It's hard for pitchers not to do well when the offense scores so many runs," Cha said. "It's interesting that whenever the Tigers scored a bunch of runs, Noesi also gave up a few runs. And when he didn't get much run support, he managed to hold the opponents at bay too."

Indeed, when Noesi allowed his season-worst six earned runs in five innings against the Bears on June 21, the Tigers bailed him out with 20 runs. On July 4, when Noesi was touched for four earned runs in six innings versus the SK Wyverns, his offense put up 15 runs on the board.

Prior to arriving in South Korea, Noesi was perhaps best known for being traded by the New York Yankees to the Seattle Mariners in exchange for a hot-shot pitching prospect Michael Pineda.

After a season and a half in the KBO, Noesi can rest assured that the Tigers aren't going to ship him anywhere, given the way he's been dealing.