SEOUL, July 12 (Yonhap) -- South Korea, the United States and Japan agreed Wednesday to continue joint efforts to put "maximum pressure" on North Korea in order to bring it to the negotiating table.

The three countries strongly condemned the North's launch last week of a ballistic missile with intercontinental range during a video conference of their defense officials, according to the South's Ministry of National Defense.

It was meant to share information on the latest provocation and discuss countermeasures. 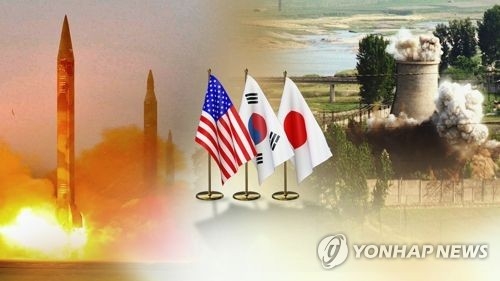 They pointed out that the July 4 missile firing was in clear violation of multiple U.N. Security Council resolutions imposing sanctions on Pyongyang and emphasized the communist regime's development of weapons of mass destruction poses a grave threat to global peace and stability, the ministry said.

The regional powers reaffirmed the importance of coordination to achieve the "complete and irreversible" denuclearization of the Korean Peninsula and coax the North into halting provocations and returning to dialogue.