According to data from a joint investigation team, comprising officials from U.N. agencies operating in the communist country, about 16 percent of all farmland in South Hwanghae Province was heavily affected by drought, with 40 percent of the farmland in the Kangryong and Jangyon counties dried up, Voice of America said.

In particular, 59 percent of the farmland in Jangpung County in North Hwanghae Province was ruined by drought, the broadcaster said, adding that rice paddies suffered more damage than corn fields.

"We plan to request a U.N. emergency fund as the nutritional conditions of children, pregnant women and lactating mothers in the Hwanghae provinces and Nampo City in North Pyongyan Province can be more vulnerable due to drought," the investigation team was cited as saying.

Last week, another American broadcaster, Radio Free Asia, quoted the U.N. Office for the Coordination of Humanitarian Affairs (OCHA) as stating that the yield in Pyongan, Hwanghae and Nampo City is expected to decline 30-80 percent this year from a year ago. 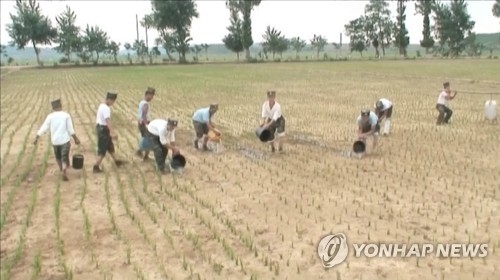