"We are facing Washington's tightening monetary policy and a trend toward trade protectionism," Finance Minister Kim Dong-yeon said in a policy meeting in Seoul. "We need concerted efforts to deal with such risks."

In line with changes, he said the government will announce a policy road map of the new Moon Jae-in government later this month, which is focused on risk management.

"We have to give coherent messages to the market," the minister said. "The government will outline a detailed scenario after reviewing each possible risk in a pre-emptive way."

"At the G-20 summit, there was a general consensus about opposing protectionism and promoting free trade," said Kim, who accompanied President Moon to last week's international conference. "The government will pay more attention to exports and trade surplus as the world economy is doing better."

On the back of an upturn in global trade and oil prices, Asia's fourth-largest economy has seen its exports rise since November last year. This has improved the country's economy-related data. 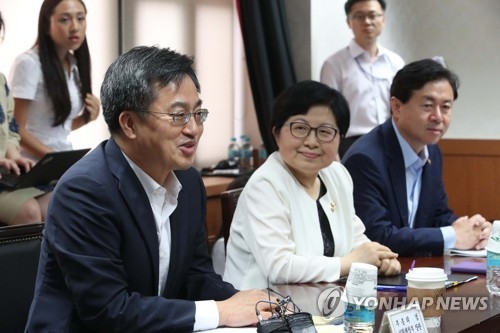 Kim, also holding the post of deputy prime minister in charge of economic affairs, reaffirmed that he has no plans to push for tax hikes.

"We may come up with some changes and revisions in tax cut programs, but we are not considering raising nominal income tax rates," the official said. "The upcoming tax revision will be aimed at creating jobs and redistributing income."

Recently, a possible tax hike has been a hot potato in the country after President Moon Jae-in hinted at more dues being collected through corporate and income taxes to secure funds to create 810,000 public jobs and support young jobseekers over the next five years.

Seoul will need an estimated 178 trillion won to accomplish Moon's job creation pledges during his five years in office.

As part of such efforts, the finance ministry will unveil a tax code revision later this month, which is expected to put stress on removing tax benefits and exemptions, rather than raising tax rates.