SEOUL, July 12 (Yonhap) -- South Korea's unification minister on Wednesday met with a group of company officials who ran factories at a now-shuttered industrial complex in North Korea as they called for more compensation for their losses over the closure.

Cho Myoung-gyon held a meeting with 14 officials from local firms that invested in the Kaesong Industrial Complex in North Korea's border city of the same name, according to Seoul's unification ministry.

"Since I became the minister, what struck me first was the joint industrial complex," the minister said at the start of the meeting. "I think that there is the need to join hands with the firms in finding solutions (to the issue)." 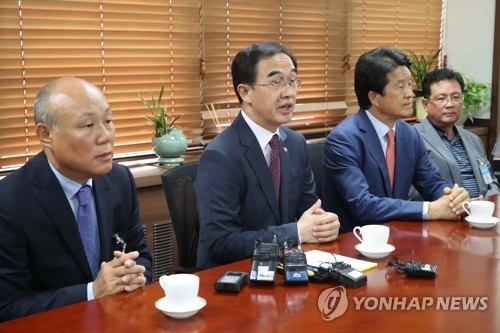 The firms claimed that the closure has incurred more than 1.5 trillion won (US$1.4 billion) in financial losses, saying that the government's financial support is not sufficient to cover their damage.

Under the government of President Moon Jae-in's predecessor, South Korea provided 501.7 billion won in funds to them after calculating their losses at some 786 billion won.

Cho told lawmakers on Monday that the government will take into account the degree of such firms' business normalization and state finance in deciding whether to give further support.

"But the government will aggressively consider additional help from the perspective of state responsibility," he said.

South Korea's unification ministry earlier said it will push to resume the park in accordance with progress in the resolution of North Korea's nuclear and missile problems.

Opened in 2004, the factory zone had housed 124 South Korean firms hiring more than 54,000 North Korean workers to produce labor-intensive goods, such as clothes and utensils.