SEOUL, July 12 (Yonhap) -- The Seoul city government on Wednesday unveiled a plan for an extra budget worth 2.31 trillion won (US$2.01 billion) mainly aimed at creating jobs, in step with President Moon Jae-in's push for easing the protracted unemployment.

The Seoul Metropolitan Government said it submitted a bill for the supplementary budget to the city parliament, which is the largest amount in eight years and accounts for about 6 percent of the city's total budget for this year.

The proposal comes in line with the central government's strong drive for job creation. The president has promised various initiatives to spur employment, including creating some 810,000 new jobs in the public sector alone during his five-year term.

South Korea is grappling with the prolonged high jobless rate, especially among younger people. The country's unemployment rate stood at 3.8 percent in June, with the figure for those aged between 15-29 recorded at 10.1 percent for the same month.

The Seoul government plans to spend some 135 billion won of the additional budget to create some 13,000 jobs for the youth, early retirees in their 50-60s and elderly people. Also part of it will be used to help women wishing to return to work after quitting their jobs to raise children.

The city government has allocated 216.9 billion won for social welfare, focusing on improving air quality, social safety, and other medical and pension benefits.

Some 55.2 billion won will be spent to revamp the city's aging infrastructure, such as subways and public parks, it added. 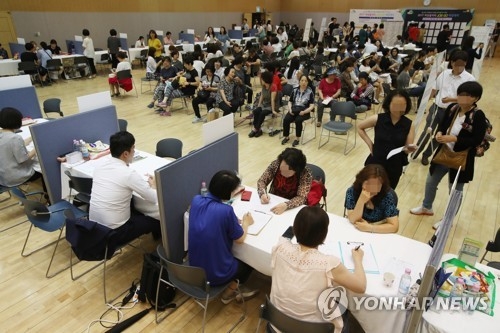