SEOUL, July 12 (Yonhap) -- South Korea's mobile stock trading has witnessed sharp gains in the past few years as the country emerged as having one of the highest smartphone penetration numbers in the world, industry data showed Wednesday.

The proportion of mobile stock trading in the secondary KOSDAQ market surged to 34.49 percent during the first six months this year from 3.12 percent in 2010, according to the figures released by the Korea Exchange.

The ratio of stock trading in the KOSDAQ market by the personal computer-based home trading system (HTS), meanwhile, declined to 48.74 percent during the first half of this year from 80.55 percent for the first six months of 2010.

For the benchmark KOSPI bourse, the ratio of mobile stock trading soared to 17.67 percent during the January-June period this year from just 1.52 percent seven years earlier.

The main bourse also witnessed the proportion of HTS stock trading falling to 24.38 percent during the first half of this year from a high 42.85 percent in 2010.

The ratio of stock trading at brokerages also dropped to 40.38 percent for the first six months of 2017 from 48.32 percent seven years earlier.

The KOSPI has more institutional and foreign investors than individuals, industry watchers said, noting they prefer trading at brokerages unlike individual investors, who are more focused on the tech-heavy KOSDAQ market, and use smartphones and other mobile gadgets to buy and sell shares. 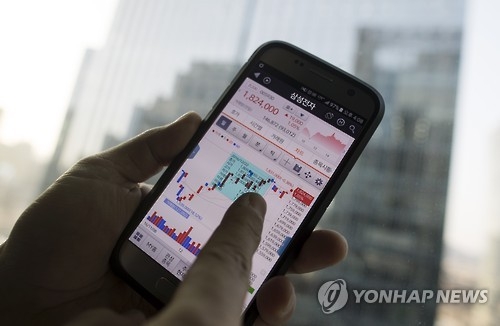