The 29-year-old left-hander went just 2-7 with a 5.91 ERA in 15 appearances for the Korea Baseball Organization (KBO) club this year. He joined the Giants on March 29, two days prior to the start of the season, as a last-minute replacement for Parker Markel, who asked to be released after struggling to adjust to the new league in spring training. 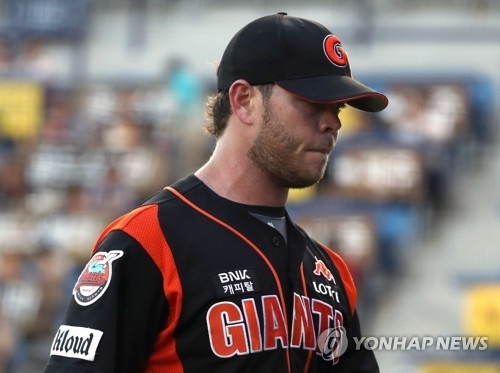 In the KBO, Additon once lost five straight decisions and made two appearances out of the bullpen last month following a brief stint in the minors.

He pitched better in his last three starts, holding opponents to four earned runs in 16 1/3 innings, but the Giants still decided to part ways with him.

The Giants, currently in seventh place among 10 clubs at 40-43-1 (wins-losses-ties), said they'll sign Additon's replacement as soon as possible.

KBO teams are each permitted to carry three foreign players, one of whom must be a position player.

The Giants' other foreign pitcher, Brooks Raley, has also spent time in the minors this year and is 6-7 with a 4.73 ERA in 16 starts.