SEOUL, July 12 (Yonhap) -- South Korea's health authorities said Wednesday that they have approved the use of the country's first gene therapy drug to help patients with degenerative joint disease.

The drug, Invossa, manufactured by local drug firm Kolon Life Science Inc. has obtained the green light from the Ministry of Food and Drug Safety for sales in the domestic market.

Invossa is the world's first cell-medicated gene therapy for osteoarthritis, a disorder involving movable joints. The company said the drug can be injected into the joint cavity of a patient.

The drug has proven to reduce osteoarthritis pain and improve cartilage through clinical trials, said Kolon Life Science, expecting to help an estimated five million patients in the country.

Having secured permission, Kolon Life Science has become the nation's first company to commercialize a gene therapy drug. This could also lay the foundation for the company to make inroads into the global gene therapy market estimated at around US$280 million.

A total of 29 South Korean drugs have so far received the permission to be put on the shelves of domestic drugstores since the SK Global Chemical Co.'s anti-cancer injection Sunpla was first approved in 1999.

Since the early 1990s, local pharmaceutical firms have been making more efforts in R&D activities to develop new drugs with in-house technology instead of relying on generic drugs. It took nearly a decade for SK Chemicals to develop the landmark anti-cancer drug, indicating the difficulty of creating a new drug without borrowing overseas technology.

The latest data shows that local pharmaceutical companies have been increasing expenditures on their R&D projects in an apparent bid to foster new growth engines. A total of 96 listed local drug firms spent 1.16 trillion won (US$984 million) on R&D in 2015. 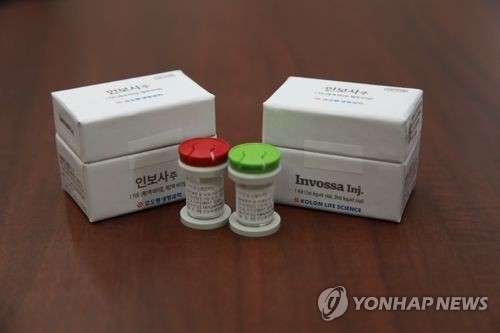