The Korea Football Association (KFA) said it has hired Jeon Kyung-jun, Kim Nam-il, Cha Du-ri, Kim Hae-woon and Lee Jae-hong as backroom staff for the national team following Shin's request. The KFA earlier said Shin, who was named the new national team boss last week, had all the rights to form his staff.

Among them, Kim Nam-il and Cha are the two familiar names to football fans, as they helped co-host South Korea reach the semifinals at the 2002 FIFA World Cup. The KFA said the two former star players will utilize their experience to assist Shin in managing the squad.

Shin said he asked Cha to re-join the national team because he has an "important role."

"It took me a whole week to persuade him to come back to the national team," Shin told reporters at Seoul World Cup Stadium during the K League Classic match between FC Seoul and Pohang Steelers. "I thought Cha's role is very important for our two remaining World Cup qualifiers."

Kim, who was with Shin at the stadium, said he will serve as a "bridge" connecting the players and the coaching staff.

"I think the players are not desperate," he said. "We all feel that we're in a difficult situation, so it's important for us to get together in one unit and overcome this crisis. I want to tell the players what kind of mindset that they should have when they play." 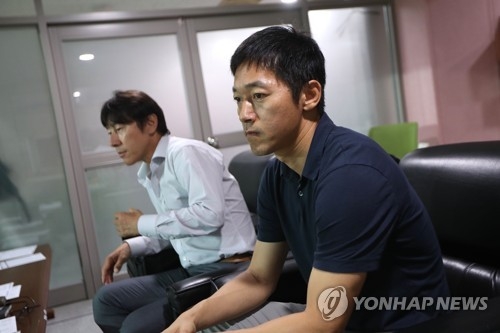 Meanwhile, Jeon, 43, is a tactician who worked with Shin on the Olympic team and the U-20 squad. Kim Hae-woon is a goalkeeper coach who also helped Shin during the FIFA U-20 World Cup, where South Korea reached the round of 16.

Lee, 34, was a full-time physical instructor at the KFA and previously worked as a physical coach for the women's national football team.

In the final Asian qualifying round for the 2018 FIFA World Cup, South Korea are barely holding on to the final automatic qualification spot with only two matches remaining. The Taeguk Warriors are stuck at 13 points with four wins, a draw and three losses, sitting in second place in Group A and just one point above Uzbekistan.

In Asia, the top two teams from Groups A and B will advance directly to the World Cup in Russia. Two third-place teams must go through playoffs for their final chance.

South Korea, looking for a ninth consecutive World Cup appearance, are scheduled to host already-qualified Iran on Aug. 31 and face Uzbekistan in Tashkent on Sept. 5 to close out the qualifying stage.