A family, whose identity was withheld, filed a complaint against McDonald's Korea with the Seoul Central District Prosecutors' Office, seeking an investigation into a possible breach of food safety law.

According to their legal representative, their three-year-old daughter suffered acute hemorrhagic enteritis about two to three hours after eating a McMorning burger, the local version of the McMuffin, in May this year.

Earlier in the day, a man in his late 30s also lodged a petition calling for a thorough probe into his claim that he was given a burger with undercooked meat at one of its stores.

Their actions followed a previous complaint submitted last week by parents of a four-year-old who has been diagnosed with hemolytic-uremic syndrome (HUS), a food-borne disease that mostly results in acute kidney failure, after she ate a Happy Meal burger last year. They blame an undercooked burger patty for the illness. She has now to receive dialysis.

The incident has spurred a heated dispute in Korea. Many criticized the U.S. fast-food chain while some played down the possibility of the burger being the cause of renal failure. Some consumers, especially parents with young kids, vowed to boycott the company and stop their children from eating fast food.

The three-year-old girl recovered after treatment and the parents did not specify an undercooked burger patty as the cause of the enteritis in their complaint.

Hwang Da-yeon, the lawyer representing both victims, said in a statement that "(The second case) fortunately didn't go as far as contracting HUS, but her initial symptoms almost exactly tally with those seen in the first victim." 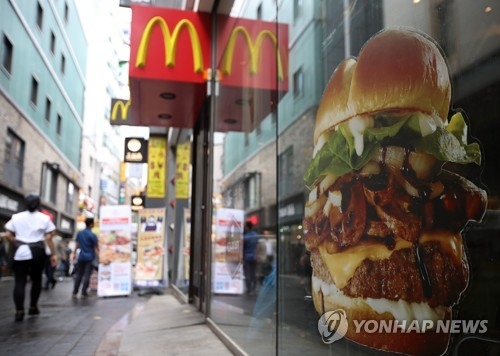