The member has been on active duty in a military band in Wonju, 132 kilometers east of Seoul, for the past 21 months.

"I'm both disappointed and relieved. I really couldn't sleep well last night because I was very nervous," Eunhyuk told about 500 fans, many of whom waited in front of the army base to welcome him back. "I worried upon hearing that you fans waited all night since yesterday, but fortunately the weather is good. I really thank you for coming." 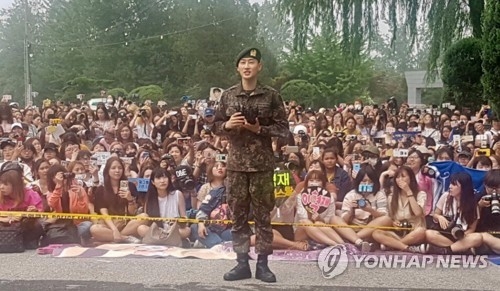 "In a couple of days, Donghae will be discharged. Behind me, there's Siwon, Kyuhyun, and Ryeowook. I hope they'll return safely," he added.

Also present to celebrate Eunhyuk's return were three members who already finished their military service -- Leeteuk, Shindong and Yesung -- and Donghae, who was on final leave ahead of his discharge on Thursday.

The fans welcomed Eunhyuk's discharge, enthusiastically waving such banners as "(I) waited 55,123,200 seconds for this moment. There is no more separation," "We won't be separate any longer," and "Elf became your strength." Elf is the name of the group's official fan club.

His first public activity after the military discharge will be a fan meeting with Donghae, according to the group's management agency, S.M. Entertainment.

The two members, who worked in the band's sub-unit "Super Junior-D&E," will hold the event at Sejong University in Seoul at 5 p.m. on July 23.

When Siwon is discharged from the military on Aug. 18, Super Junior is scheduled to begin temporarily working as a seven-member group with the release of a new album in October. 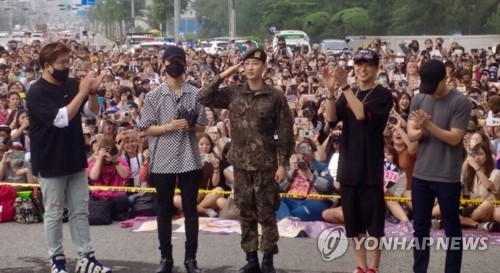