SEOUL, July 13 (Yonhap) -- K-pop group Cosmic Girls, also known as WJSN, has unveiled a teaser for the music video of its new single "Kiss Me."

The teaser was uploaded on the official YouTube channel and Naver V app channel of the group's agency Starship Entertainment on July 12. The new song is scheduled to hit various online music services on July 14 at 6 p.m.

"Kiss Me" is a summer song depicting the cute heart of a girl waiting for a kiss from a crush. An exciting beat and electric guitar element add to the song's perfect summer atmosphere.

The 13-member group made its debut in early 2016 with the EP "Would You Like?" and their roster includes Chinese members Xuan Yi, Cheng Xiao and Mei Qi. It has since shown off its diverse charm in various fields such as television, music and advertising. 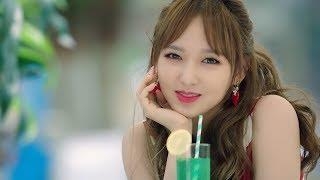