SEJONG, July 13 (Yonhap) -- South Korea's auto exports made a turnaround for the first time in three years in the January-June period on an upturn in global demand, government data showed Thursday.

The total value of vehicles shipped overseas reached US$21.5 billion in the first half, up 4.2 percent from a year earlier, according to the data compiled by the Ministry of Trade, Industry and Energy.

It is the first time since the first quarter of 2014 that the country's half-yearly car exports ended in positive territory.

The number of cars sold abroad, however, edged down 0.8 percent on-year to 1.32 million units in the cited time period.

The ministry attributed the rebound to rising demand for South Korea-made green cars and sport utility vehicles (SUVs) compared to the past. Exports of eco-friendly cars such as electric or hybrid vehicles shot up more than five-fold to 70,196 units in the six months ending in June from 13,753 units tallied over the same period last year.

By region, South Korea saw car exports gain ground in all areas in the world except the United States.

Auto shipments to Europe jumped 34.3 percent on-year to $3.5 billion, with $2.7 billion worth of cars exported to the Middle East and $1.5 billion to Latin America. 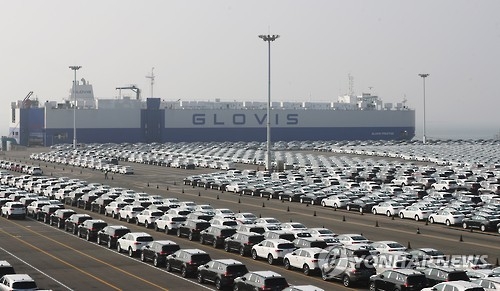