SEOUL, July 13 (Yonhap) -- Samsung Electronics Co.'s market cap has grown to exceed that of the entire secondary bourse and more than make up for the company's erased stocks this year, data showed Thursday.

The market cap of the tech firm as of the end of trading Wednesday was 362 trillion won (US$316.7 billion), including preferred shares. Ordinary shares accounted for 326 trillion won.

According to the Korea Exchange, the sum is equal to 23.27 percent of the main bourse KOSPI. It is 1.72 times bigger than the entire market cap of the secondary tech-heavy KOSDAQ bourse.

Samsung, the world's largest producer of memory chips and smartphones, last week estimated its second-quarter operational profit at a record-high 14 trillion won, pushed by the rising prices of chips and strong sales of its new flagship smartphone.

Market watchers say the company's decision to scrap 49 trillion won worth of company stock also strengthened the value of Samsung shares. The company canceled 8.99 million ordinary shares in May, reducing its market cap by 21.45 trillion won. Data shows that the market cap has increased by 32.4 trillion won since then. 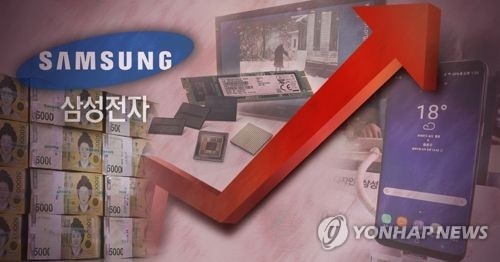