The Stonic subcompact SUV went on sale on Thursday in the domestic market as part of its efforts to absorb growing consumer demand for crossovers amid a global economic recovery and low oil prices.

The B-segment SUV market has grown fast over the past five years since 2013 to 110,000 units in South Korea. The Stonic is geared to attract customers in their 20s and 30s, who tend to prioritize price and fuel efficiency, the company said.

The Stonic comes with a 1.6-liter diesel engine and a seven-speed dual-clutch transmission. It has a fuel economy rated at 17 kilometers per liter and is equipped with six air bags. It is priced at 19-23 million won (US$16,700-$22,600) depending on options. 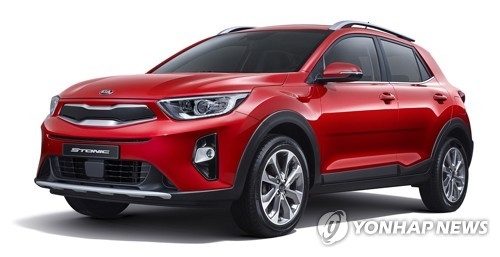 Kia is considering launching the gasoline-powered Stonic in the domestic market as well. But no decision has been made yet, Kia Domestic Marketing Director Seo Bo-won said last month.

Kia's current SUV lineup is composed of the Mohave, Sorento, Sportage and Niro. The Niro is a hybrid crossover that is tuned to attract eco-conscious drivers.

The carmaker also produces the popular K5, sold as the Optima in the United States, along with the K3, K7 and K9 sedans and the Soul multi-purpose vehicle.

In June, Hyundai Motor Co. which owns a 34-percent stake in Kia unveiled its first subcompact SUV Kona to bolster its SUV lineup. The two together form the world's fifth-largest carmaker by sales.