SEOUL, July 13 (Yonhap) -- One Japanese national and a South Korean accomplice have been arrested for smuggling gold bullion worth some 3.5 billion won (US$3.07 million) from Hong Kong, the customs authorities said Thursday.

The Incheon-based customs agency said a 24-year-old Japanese man, whose identity was withheld, and a 49-year-old South Korean, identified only by his last name Hong, are in custody.

They are suspected of bringing in some 70 kilograms of gold bars into the country from Hong Kong via Japan, Singapore and Indonesia on six occasions from March-May, the authorities said. 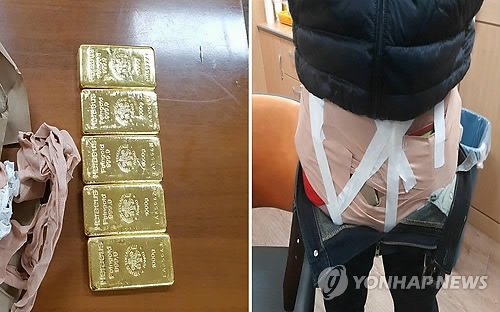 They reportedly snuck them in by taping the gold bullion around their abdomens. They communicated through a mobile messenger and the operations were carried out strictly in accordance with predetermined times and places.

The Japanese suspect was in charge of the transportation, while Hong played the role of selling the gold to local wholesalers, the authorities said.

The customs agency said it will bolster monitoring on the illegal import of the commodity, while keeping close tabs on analyzing and searching inbound travelers suspected of similar crimes.

Two arrested for smuggling gold from Hong Kong via Japan

Two arrested for smuggling gold from Hong Kong via Japan