The Seoul Central District Prosecutors' Office said the two, only identified by their last names Kim and Yang, were indicted on charges of bribing South Korean UFC fighter Bang Tae-hyun to deliberately throw a fight at the UFC Fight Night 79 in 2015, the first UFC event held in South Korea.

According to the prosecutors, the two brokers gave Bang 100 million won (US$87,800) to lose against Leo Kuntz in the first or second round of their lightweight contest. The scam, however, didn't work as Bang apparently changed his mind at the last moment and went on to beat Kuntz via split decision.

Bang reportedly decided not to throw the match after UFC officials warned him about fight fixing following a sudden shift in betting patterns on gambling websites. Bang was first listed as the slight favorite against Kuntz but just hours before the fight, the UFC officials caught drastic changes in odds that made him the underdog and his American opponent the overwhelming favorite.

After the fixing went unsuccessful, Yang, who lost 190 million won, threatened Kim and Bang to give back his money and later took 10 million won from each of them. The prosecutors said they added racketeering charges against Yang.

The UFC has yet to make a statement on the incident. 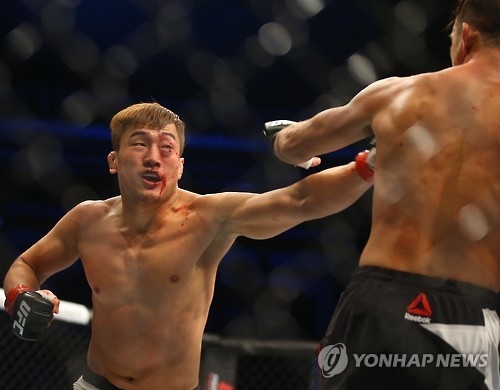