SEOUL, July 13 (Yonhap) -- A new large building is under construction inside the North Embassy compound in Beijing, raising suspicions that it might be for commercial use in violation of U.N. resolutions, a U.S-based Internet news organ specializing in North Korea said Thursday.

"The Embassy in Beijing is reportedly building new lodging facilities for North Koreans visiting China in its compound. It's still unclear whether it will be for commercial use or not," NK News said, citing unidentified sources.

"I think (the building) is for North Koreans temporarily staying in Beijing like high-level officials and diplomatic delegates," a source was cited as saying.

The new structure could be an extension of the mission's existing lodging for North Koreans staying in Beijing or visiting the Chinese capital, Andray Abrahamian, an Honorary Fellow at Macquarie University in Australia, said.

Some cast doubts, however, saying that it could be a commercial facility for foreigners as shown with the North Korean embassies in Germany, Romania, Bulgaria and Poland.

The Beijing mission building is the largest among the North's overseas missions, and the area to its east is full of commercial facilities, including grocery stores, exchange shops, optical stores and North Korean food shops. 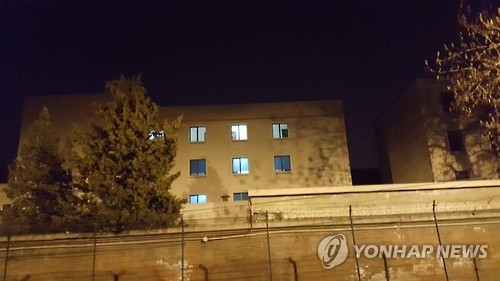