SEOUL, July 13 (Yonhap) -- The South Korean baseball league will bid adieu to one of its greatest players with a series of special events in his final All-Star Game this weekend.

The Korea Baseball Organization (KBO) said Thursday that Samsung Lions slugger Lee Seung-yuop will take the field with his two sons, Eun-hyuk and Eun-yuop, prior to the midsummer classic at 6 p.m. Saturday at Daegu Samsung Lions Park in Daegu. Eun-hyuk, 13, will throw out the ceremonial first pitch, with his younger brother Eun-yuop, 7, standing at the plate and their father taking the catcher's position.

Lee, who turns 41 next month, will retire after the 2017 season, after 15 seasons with the Lions, his hometown team. Lee was drafted as a pitcher out of high school in 1995 but converted to first baseman as a pro.

Lee also owns the KBO's single-season home run record with 56 from the 2013 season. He is a five-time regular season MVP and remains the only player to win the top individual award in three consecutive seasons (2001 to 2003).

Also on Saturday, Lee will have an autograph session at the ballpark starting at 3:50 p.m. After the ceremonial pitch, KBO Commissioner Koo Bon-neung will present Lee with a commemorative All-Star jersey.

Lee played his very first All-Star Game in Daegu in 1997. 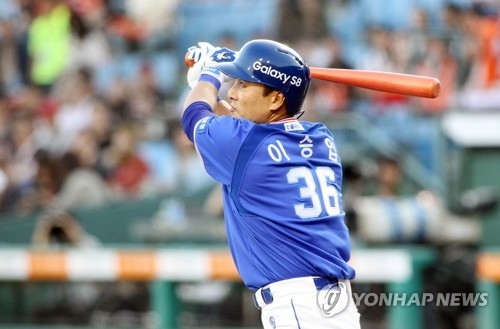