The quartet of Minah, Sojin, Yura and Hyeri became the first pop music group to be appointed in the role for the first Winter Olympics in South Korea. Last month, Taeyang, a member of BIGBANG, was named a goodwill spokesman.

Girl's Day was also named "friends" for PyeongChang's Passion Crew, which refers to the Olympic organizing committee staff, volunteers and other operation personnel.

"It's an honor to represent the PyeongChang Winter Olympics," said Sojin, the group's leader, at the appointment ceremony in Seoul. "We accepted the role because we wanted to promote the Olympics and encourage all the people working behind the scenes."

The four members said they enjoy snowboarding and skiing in winter, and those were the two Winter Olympics sports with which they were most familiar.

Hyeri said she's friends with short tracker-turned-speed skater Park Seung-hi and that Park is one athlete she'll keep a close eye on during PyeongChang 2018.

Park won two gold medals, along with a bronze, in short track at the 2014 Sochi Winter Games and switched to speed skating later that year.

Lee Hee-beom, president of the PyeongChang Olympic organizing committee, said he expects the interest level in the Olympics to shoot up with Girl's Day on board, calling the group "a world star." 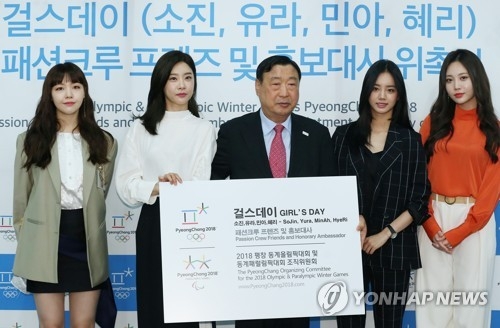