SEOUL, July 13 (Yonhap) -- South Korea's foreign minister said Thursday that she has ordered the heads of overseas missions to strengthen discipline and work ethic in the wake of an alleged rape recently reported from the embassy in Ethiopia.

An internal investigation is under way into allegations that a high-ranking diplomat stationed there had sexually assaulted a contracted female worker at his home Saturday (local time). The diplomat has returned to Seoul to face questioning.

"(I) have already ordered heads of all the overseas missions to enforce tight working discipline," Foreign Minister Kang Kyung-wha said during her first meeting with labor union representatives of the ministry after taking office last month. 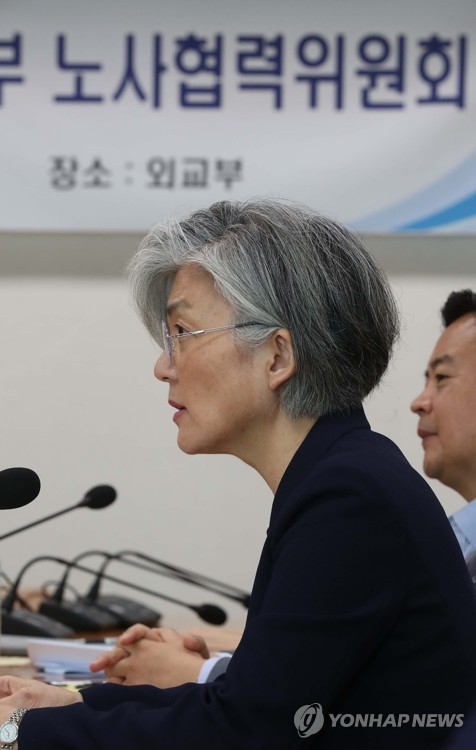 "I find it very deplorable in that such a serious discipline issue took place at an overseas mission at a time when our ministry has been carrying out innovation efforts timed with the new government's inauguration," she added.

The minister noted that she will give no tolerance, in particular, to sexual crimes and misdeeds.

The case is only the latest in a series of similar incidents involving the country's diplomats overseas.

Last September, a diplomat stationed in Chile was found to have sexually harassed a 14-year-old girl while teaching her Korean. He was later dismissed as a punishment.

An incumbent ambassador dispatched to a Middle East country was also found last year to have been punished for sexually harassing an embassy worker.

Since earlier this year, the ministry has been running a task force looking into ways to step up working discipline, especially for diplomats at overseas missions, as part of efforts to prevent the recurrence of such misdeeds.