"Well, he's a friend of mine. I have great respect for him. We've gotten to know each other very well. A great leader. He's a very talented man. I think he's a very good man," Trump said during a joint news conference in Paris with French President Emmanuel Macron.

"He loves China. I can tell you, he loves China. He wants to do what's right for China. We've asked him for some assistance with respect to North Korea. Probably he could do a little bit more, but we'll find out," Trump said.

Trump said that a lot of good things have happened in the U.S. relations with China.

"He's been very nice. He's let, as you know, beef go back in, certain financing go back in, credit card financing, and various other things go back in, at my request, which is a great thing for our farmers," Trump said. "President Xi is a terrific guy. I like being with him a lot. Any he's a very special person." 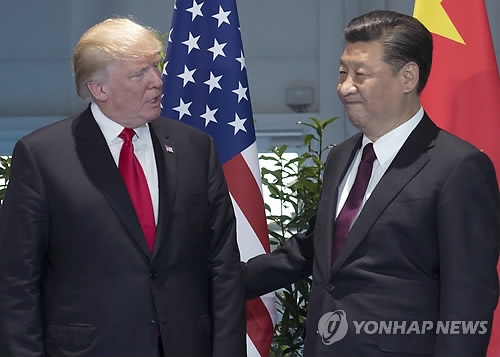 The praises contrast with the frustration Trump has expressed in recent weeks after months of fruitless efforts to persuade Beijing to exercise more of its influence as the North's economic lifeline to rein in the provocative regime.

Trump's frustration appears to have deepened after the North test-fired an intercontinental ballistic missile that is believed to be capable of striking Alaska and could be further developed to reach the U.S. mainland.

Last week, Trump also questioned the sincerity of China's efforts to pressure the North. He pointed out that trade between China and the North has grown nearly 40 percent, leading him to say, "So much for China working with us."

China is North Korea's last-remaining major ally and a key provider of food and fuel. But it has been reluctant to use its influence over Pyongyang for fear that pushing the regime too hard could result in instability in the North and hurt Chinese national interests.