SEOUL, July 27 (Yonhap) -- "I really don't know how I managed to survive looking back now ... the hardships ... I can't talk about it," one of the Korean survivors of the infamous forced labor in the coal mines on Japan's Hashima Island during the colonial era said on Thursday, when a South Korean film on the dark history hit screens nationwide.

"There's no such heinous people as the Japanese," Choi Jang-seop, 88, said during an interview with Yonhap News Agency at a Seoul-based foundation for Koreans who were mobilized for forced work at Japanese coal mines, steel mills and shipyards under harsh conditions during the Japanese colonial rule of Korea (1910-45). He shuddered upon hearing the name of the island, whose nickname is "Battleship Island" in Japanese. The nickname came from its resemblance to the Japanese battleship Tosa.

"I virtually lived a prison life on Hashima. I feel horrendous and heavy whenever I recall the time when I worked at the bottom of coal mines while only wearing my underwear," said Choi, who was forcibly taken to Japan at the age of 15 in 1943.

Hashima is now an abandoned island, 18 kilometers from the southern Japanese port city of Nagasaki.

During World War II, the Mitsubishi Group, which was Japan's largest munitions company, extracted coal from the island by making use of forced Korean and Chinese laborers.

According to official data, 58,000 Koreans forcibly worked at 23 coal mines, steel mills and shipyards in Japan. Of them, some 800 Koreans were taken to the island between 1939-1945, with 134 of them dying while working there.

Most of the Korean workers extracted coal from deep inside the mines or filled in gaps created by the excavation to prevent tunnels from collapsing. 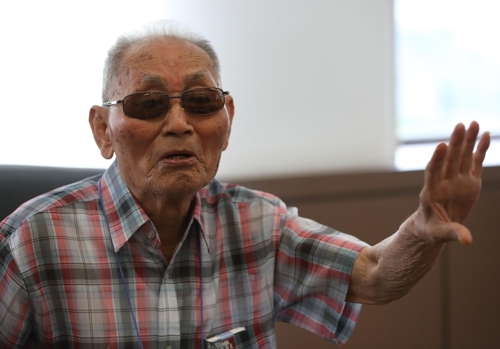 Japanese superintendents used to tell Choi, who was filling in the gaps, "Oh, what a shame to be a young guy like you. Falling rocks smash people in the head all the time."

Sure enough, he was hospitalized after falling rocks badly hurt his head.

"We ate only a hunk of rice ball while working a double shift for 12 hours a day. It's not once or twice that I felt bitter about my motherland," Choi said.

Some of the forced Korean laborers tried to escape from the island, also called "Prison Island" or "Hell Island," to no avail.

All the escapees either drowned, failing to reach land, or were captured by the Japanese. In reality, there is no record of workers who succeeded in breaking out from the island.

"There was a small island next to Hashima. It's called a 'crematory' as people who died while working or escaping from Hashima were cremated there," Hashima survivor Lee In-woo said.

"I was conscripted by the Japanese army when I turned 20 after working at the mines on Hashima for about eight months. I even told myself, 'I'm saved now,' when entering the army as the work on the island was so hard," the 92-year-old said. 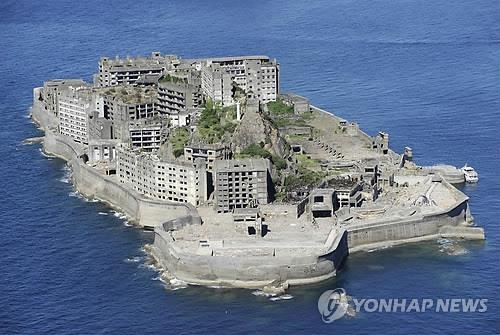 Despite the island's dark history, Japan pushed for the listing of the island as the UNESCO World Heritage Site in 2009, insisting it's a symbol of its industrialization.

The island was finally included on the Heritage List in July 2015 through a compromise between South Korea and Japan at a World Heritage Committee (WHC) meeting in Germany, in which a Japanese government representative acknowledged that a large number of Koreans and others were brought against their will and "forced to work under harsh conditions" in the 1940s at some of the sites, including Hashima Island.

Japan also promised to set up a sign stating the fact that forced labor occurred on the island before December this year.

But the Japanese government changed its stance right after the listing, saying, "The remark of 'forced to work under harsh conditions' by the Japanese representative did not mean 'forced labor.'"

There has yet to be any news on the establishment of the sign, with the deadline just about five months away.

In designating Hashima as a heritage site, the WHC launched a system to monitor whether Japan will keep its promise and will assess it during its session next year.

"I think Japan will set up the sign because the listing can be called off unless it keeps its promise," said Kim Yong-bong, the head of the foundation.

Hashima has become a major tourist attraction since it became a heritage site.

In the meantime, the South Korean-made film "The Battleship Island" set a new opening day record at the local box office, attracting more than 970,000 moviegoers Thursday.

The action movie starring Song Joong-ki, So Ji-sub and Hwang Jung-min is about an attempted prison break from the forced labor camp on Hashima.
(END)