In early March, Lotte agreed with the Seoul government to swap its golf course in the southeastern county of Seongju for a land lot near Seoul in order to allow the deployment of a Terminal High Altitude Area Defense (THAAD) battery, which China suspects could be used to spy on its military.

Days later, Beijing banned its travel agencies from selling package tours to South Korea in a big blow to Lotte, which depends on Chinese tourists for a considerable part of its revenue.

According to the data by the Financial Supervisory Service, the consolidated operating income of Lotte Shopping plunged 49 percent on-year to 87.3 billion won (US$78 million) in the April-June period.

Sales of the company, which runs Lotte Department Store and discount chain Lotte Mart, dipped 4.3 percent to 6.92 trillion won, with its bottom line nose-diving 95 percent to a mere 4.1 billion won.

"On the domestic front, a recovery in the revenue of Lotte Department Store was delayed amid a fall in the number of Chinese tourists," Lotte Shopping said. "Sales of stores in China dropped at a faster pace amid the continued fallout of the THAAD row." 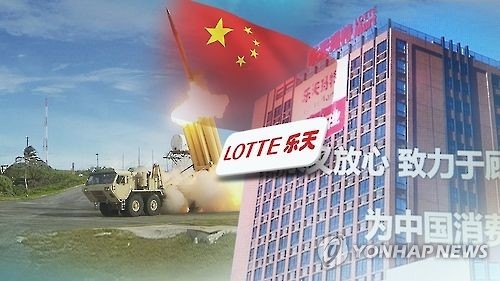 Lotte Department Store saw its domestic sales decline due to the drop in Chinese customers, and revenue of its outlets in China sank 28.6 percent.

Sales of Lotte Mart, most of whose Chinese stores have been suspended by Beijing, fell 7.9 percent on-year in the second quarter, and the company posted an operating loss of 77 billion won. In particular, its Chinese sales plunged 94.9 percent.

The company injected 360 billion won of emergency funds to operate the discount chain, but the money will likely be spent within this month.

Lotte said it is considering issuing corporate bonds so it can secure 300 billion won to 500 billion won in fresh resources to support the supermarket chain until the situation improves.

Market watchers forecast Lotte units to fare ill for the time being as the THAAD row is likely to last a long time.

"With no signs of a solution to the THAAD showdown, Lotte and other China-focused companies will find it difficult to turn around, despite possible improvements stemming from a rebound in domestic consumption," an industry source said.
(END)