SEOUL, Aug. 3 (Yonhap) -- A Korean film about the 1980 pro-democracy uprising in Gwangju surpassed 1 million in admissions on its second day of run, data showed Thursday.

"A Taxi Driver" hit the milestone at about 11:45 a.m., according to the computerized box office tally from the Korean Film Council (KOFIC).

The pace is the same as "Roaring Currents," the most-viewed film ever in South Korea and "The Battleship Island" which recently topped the 5-million mark.

The period drama starring Song Kang-ho and German actor Thomas Kretschmann tells the story of a Seoul taxi driver named Man-seop who happens to take German reporter Jurgen Hinzpeter to Gwangju, some 330 kilometers south of Seoul, for a big money offer and witnesses the horrors of the bloody military crackdown on the May 18 uprising. 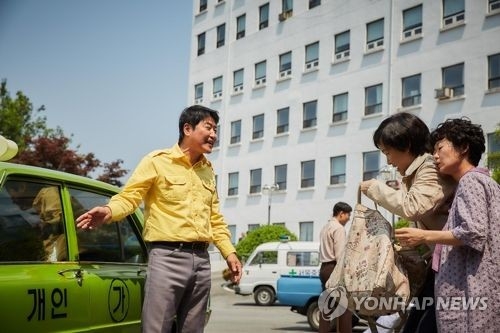 'A Taxi Driver' tops 1 mln in attendance on 2nd day

'A Taxi Driver' tops 1 mln in attendance on 2nd day