SEOUL, Aug. 7 (Yonhap) -- The leader of the main opposition Liberty Korea Party on Monday renewed calls for South Korea to open talks with the United States over the redeployment of tactical nuclear weapons to counter North Korea's growing nuclear threats.

Hong Joon-pyo reiterated that peace on the Korean Peninsula can be achieved through a "balance of power," dismissing President Moon Jae-in's pursuit of dialogue and rapprochement with the North as "unrealistic."

"Peace will come when we achieve a balance of power, not when we are begging for it," Hong said during a meeting with senior party officials.

"It is time for us to engage in earnest discussions with the U.S. over the redeployment of tactical nukes through a strengthening of the alliance," he added. 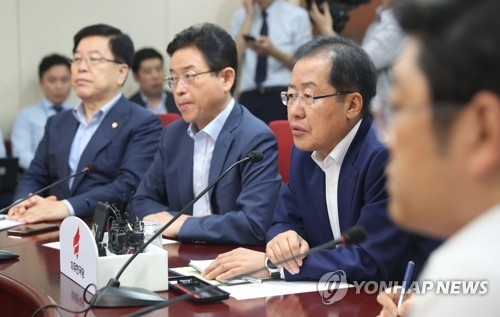 Following his remarks, the party decided to seek redeployment as an official party line.

The hawkish politician has long called for the redeployment of the U.S. nuclear arsenal, which was withdrawn from the peninsula after the two Koreas adopted a joint declaration on denuclearization in 1991.

Calls for the nuclear arms resurged after the North tested what it claims to have been an intercontinental ballistic missile (ICBM) twice last month.

Some lawmakers from the minor Bareun Party also raised the need for Seoul to consider a nuclear option.

"Should the North cross the red line such as conducting a sixth nuclear test or deploying fully operational ICBMs, (South Korea) cannot but raise the need for the redeployment of tactical nukes or our sovereign right to develop nuclear arms," Kim Young-woo told Yonhap News Agency. Kim chairs the parliament's defense committee.