WASHINGTON, Aug. 8 (Yonhap) -- U.S. President Donald Trump warned Tuesday that North Korea will be met with "fire and fury" if it continues to threaten his country, according to news reports.

Trump made the remark during a briefing at his golf course in Bedminster, New Jersey.

"North Korea best not make any more threats to the United States. They will be met with fire and fury like the world has never seen," Trump said, according to Reuters.

The warning comes after the North threatened to retaliate and take "physical" action against the U.S. over the United Nations' adoption of new sanctions on Saturday.

Shortly before Trump's warning, the Washington Post cited U.S. intelligence officials as saying that the reclusive regime has succeeded in producing a nuclear warhead that can fit atop its missiles.

The assessment was made by the Defense Intelligence Agency last month, the paper said, marking another alarming development in the communist country's pursuit of nuclear-tipped ballistic missiles that can reach the U.S. mainland.

"The IC (intelligence community) assesses North Korea has produced nuclear weapons for ballistic missile delivery, to include delivery by ICBM-class missiles," the assessment said, according to the Washington Post.

In response to queries from Yonhap, both the Pentagon and the State Department declined to comment, saying the assessment falls under the realm of intelligence.

The Post said a separate intelligence assessment concluded the North has built up to 60 nuclear warheads, a number far larger than independent experts' estimates.

North Korea claimed in September that it had successfully tested the kind of nuclear warhead described in the report. Experts have remained skeptical.

Ken Gause, a North Korea expert who is director of the International Affairs Group at CNA Corp., was cautious to embrace the assessment.

"It's been almost a year since the sixth nuclear test. What has taken so long to reach this conclusion by the IC?" he said in an email to Yonhap. "Does it represent a general conclusion of the IC or only parts of it? And why has this new projection emerged at a point of heightened tensions on the peninsula?" 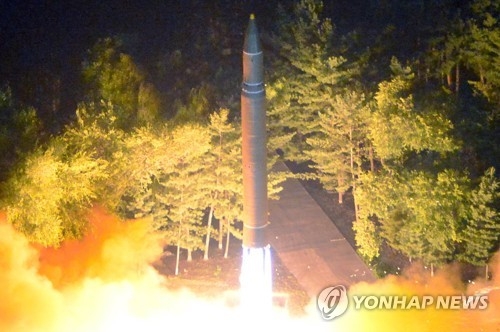 (LEAD) Trump warns N. Korea will be met with fire and fury: reports

(LEAD) Trump warns N. Korea will be met with fire and fury: reports