SEOUL, Aug. 23 (Yonhap) -- South Korean wrestler Ryu Han-su has claimed a gold medal at the world championships, as he washed away his painful memories of last year's Olympics.

Ryu topped the men's Greco-Roman 66 kilograms at the 2017 World Wrestling Championships in Paris on Tuesday (local time) after beating Mateusz Bernatek of Poland 2-1 in the final. This was Ryu's second gold medal at the worlds after earning his first one in 2013. In 2015, he settled for silver.

"When I first became a (world) champion, it seemed unreal to me," Ryu said. "But this second time, I really felt like I'm a champion."

The latest world title made up for Ryu's disappointment at the 2016 Rio de Janeiro Summer Olympic Games, where he came up short of a medal.

In his maiden Olympics, the 29-year-old lost a quarterfinal match. He still had an opportunity to take the bronze medal through repechage but he also lost in that bout and came home empty-handed.

"I really wanted an Olympic medal, but I was sad that I couldn't win it," he said. "That's why I worked hard and it led me to a good result here (at the worlds)."

Ryu now eyes the 2020 Tokyo Olympics. Although he will be in his 30s and have to compete against younger wrestlers, Ryu said he is ready to for the challenge.

The Olympic gold medal is the only major title that Ryu has yet to grab in his career. He already won the Asian Games gold medal in 2014 and topped the Asian Wrestling Championships in 2015.

If he claims gold at the Tokyo Games, he will be the fourth South Korean wrestler to win four major tournaments (Olympics, World Championships, Asian Games and Asian Championships).

"I try to become a wrestler who doesn't suffer a defeat," he said. "My last goal is to win the Olympic gold." 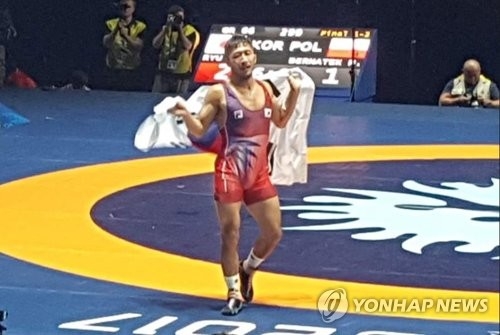