SEOUL, Aug. 30 (Yonhap) -- A Seoul court sentenced a former spy agency chief to four years in prison Wednesday, finding him guilty of meddling in the 2012 presidential election through a covert cyber operation.

The Seoul High Court handed down the verdict to Won Sei-hoon, who headed the National Intelligence Agency (NIS) from 2009 to 2013, more than two years after the top court sent the case back to the lower court for retrial, citing insufficient evidence.

Won was put behind bars immediately after the ruling. He was on trial without detention.

The ex-NIS director was indicted in 2013 for running an illicit smear campaign to sway voters in favor of then presidential candidate Park Geun-hye. NIS officials hired hundreds of civilians to post Internet comments in support of Park and against her liberal rival Moon Jae-in. Park won the election by a thin margin.

In the final verdict, the court found Won guilty of interfering in the vote as well as politics, in violation of the election and NIS laws. The previous rulings had given mixed views over whether the cyber operations he ordered constitutes an illegal interference in the election.

The 66-year-old defendant was released on bail upon the top court's ruling two years ago.

Two other NIS officials, who have been indicted for the same charges, got 2 1/2-year prison sentences suspended for four years. 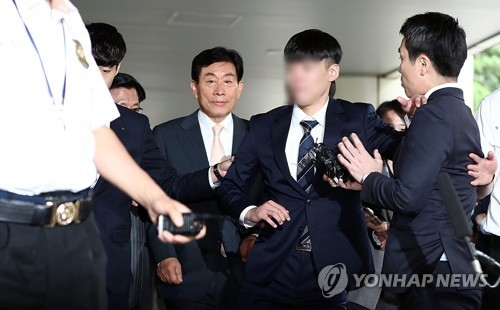