SEOUL, Aug. 31 (Yonhap) -- President Moon Jae-in on Thursday called for swift and multidimensional efforts to boost the country's slowing birthrate, which he warned could do "unrepairable" damage to the nation if left untouched.

Meeting with officials from the labor, welfare and gender equality ministries for a policy discussion session, the president insisted the country must work to remove fundamental causes of the problem, including the high cost of child rearing.

"We spent 100 trillion won (US$88.7 billion) over the past 10 years to resolve the issue of the low birthrate, but the issue is showing no signs of resolution and the country will face a national crisis where its population will fast decline if we continue down this path," the president said, according to pool reports.

"And after a few years, there will be no way to repair the damage," he added, noting the country's birthrate was expected to fall to a record low of 1.03 this year, compared with 1.17 in 2016. 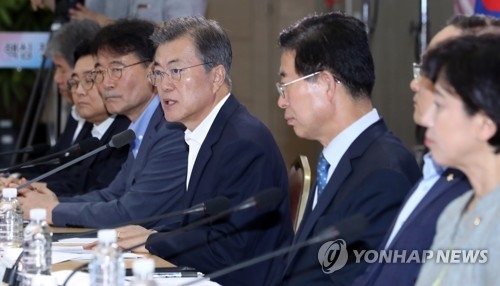 "That is why the government will have to create a social environment where the people can (easily) give birth and raise children through a structural change at the fundamental level in areas such as employment, housing and gender equality, while also strengthening the nation's responsibility in childbirths and child rearing," the president said.

Thursday's meeting marked the last of a series of policy debates with government ministries, which started last Tuesday.

"We urgently need government efforts to change the people's way of life in all areas, including employment, child rearing, education, housing and medical services," Moon told the meeting.

"Reducing the long working hours to allow parents more time to look after their children and find a balance between their work and life is also an important task," he said.

"The new government has a firm belief that investing in our people is the way to revive the economy and ensure the future of our country. Government spending on the low birthrate, jobs and narrowing disparity are welfare spending but also development spending."