The 5.7 magnitude "artificial earthquake" that occurred in the Punggye-ri area at around 12:29 p.m. is "presumed" to be from the North's sixth nuclear test, the Joint Chiefs of Staff (JCS) announced.

Pyongyang said it will make an "important announcement" at 3:30 p.m. (Seoul time). The secretive communist nation has often used such a method to make public its successful nuclear test or long-range missile launch.

The JCS said all South Korean troops have been put on high alert, with the North scheduled to commemorate its founding anniversary later this week.

"(We) are closely monitoring the North Korean military's move under South Korea-U.S. coordination," the JCS said.

The Japanese government has concluded that the seismic waves stemmed from the North's six nuclear test, Japans' Foreign Minister Taro Kono was quoted as saying by the Kyodo news service. 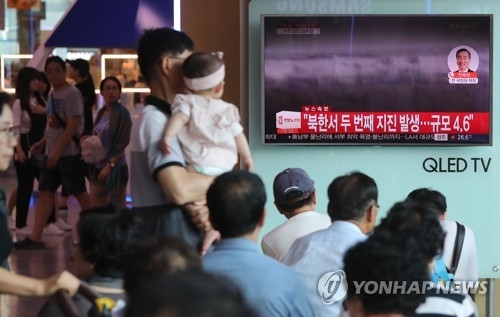 The Korea Meteorological Administration (KMA) initially put the scale of the earthquake at magnitude 5.6 but revised it to 5.7.

China's Earthquake Administration said there was another quake in the North of magnitude 4.6 some eight minutes after the previous one, according to news reports.

Hours earlier, North Korea claimed that it has developed a hydrogen bomb that can be loaded into a new intercontinental ballistic missile (ICBM).

The North conducted its first underground nuclear test in 2006 and carried out four others, including two last year, at the Punggye-ri site in the northeastern province.

The previous explosion a year ago, presumably with a yield of 10 kilotons, triggered a 5.04 magnitude earthquake.

"If an artificial quake is due to a nuclear test, a 0.2 increase in its magnitude is usually assessed as having a twofold increase in yield," a KMA official said. "The artificial quake this time (in the North) is presumed to have a yield of more than 9.8 times than that a year ago."

It means it was more powerful than any other nuclear experiments by North Korea, he added.