In the report to the U.N. Security Council (UNSC), Kuwait said it has decided to cut the number of North Korean diplomats in the country to four from the current nine, the Voice of America (VOA) reported.

The report did not mention when the five diplomats will return home.

The move is in line with UNSC Resolution 2321 adopted last year to punish the North's fifth nuclear test.

Kuwait has also stopped the issuance of visas for North Korean nationals. North Koreans in the Middle East country will be told to leave it once their residential permits expire, according to the report.

Currently, some 6,000 North Koreans are believed to work in Kuwait.

On Monday, the UNSC adopted its ninth sanctions resolution against the North, this time in response to its sixth and most powerful nuke test on Sept. 3. Despite the fresh package of sanctions, Pyongyang staged yet another missile provocation on Friday. 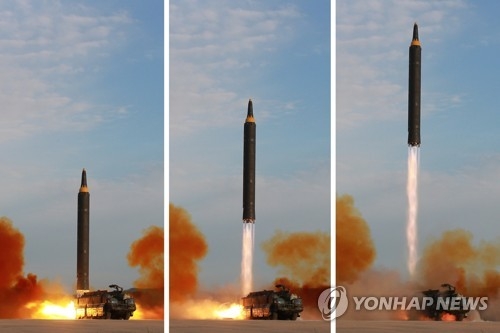