SEOUL, Sept. 27 (Yonhap) -- Most Koreans might have never heard of Julian Opie. But many Seoul citizens certainly know the artist's trademark LED installation of walking people in motion, which was prominently displayed on the giant facade of Seoul Square several times in the past.

Suwon Ipark Museum of Art is to present the artist's one-man exhibition for Sept. 28-Jan. 21 as part of "Korea/U.K. 2017-2018," a yearlong project to promote mutual understanding between the two nations through culture and arts. The large-scale exhibition is also to mark the museum's second anniversary.

"I hope you all enjoy the exhibition. There are 80 works in the exhibition. I can't expect you to like all of them, but at least for me it is a great opportunity to display a lot of my works in various aspects," Opie told reporters at a media preview Wednesday at the museum in Suwon, some 45 kilometers south of Seoul. 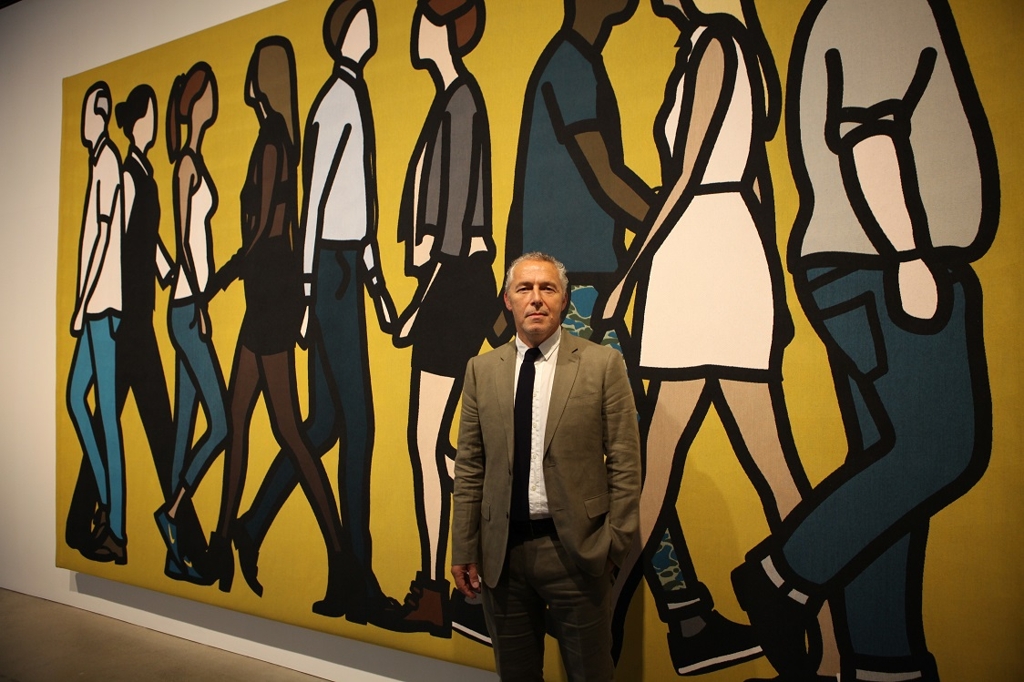 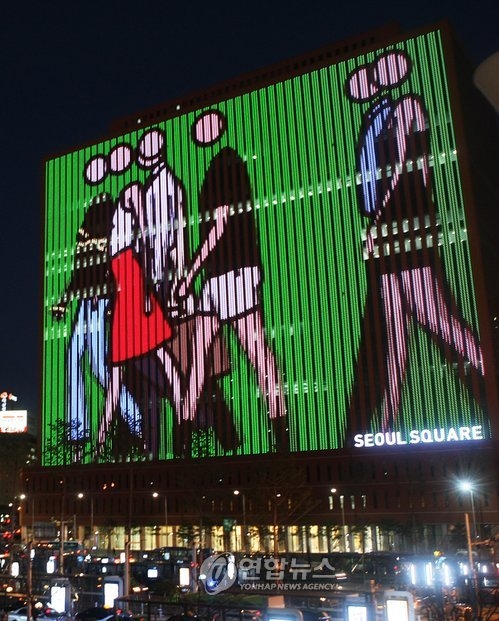 Dressed up in an olive green suit and a black tie, the British artist radiated considerable personal charm and an air of confidence. He sent his greetings to Korean media and answered to every question while standing up, saying that "it is easier to project."

"I have shown my work quite a few times but never had an opportunity to show the full breath of what I am interested in at the moment. So it is exciting for me because I've never gotten to see my work like this."

Indeed, the special exhibition is huge in scale, with a few site-specific artworks on view which the artist produced during his stay in the country for the last few weeks. His simplistic, minimal expression of human figures and landscape are rendered in various medium ranging from 3D sculpture to tapestry to mosaics. "Towers. 2" is his ambitious, tallest-ever installation at 8 meters, aimed at broadening gallery experiences by bringing cityscapes indoor.

On the glass facade of the museum, he created "People," a 24-meter-long LED installation after looking at the people strolling in the giant plaza in front of the museum. "Walking in Sadang-dong In the Rain" and "Temple Woman" are also the results of his observation of Koreans who go about their daily lives. 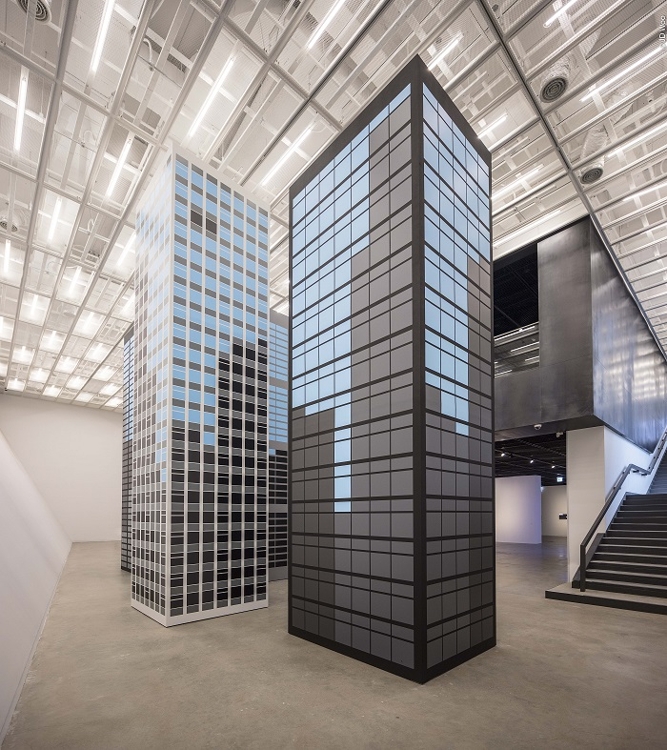 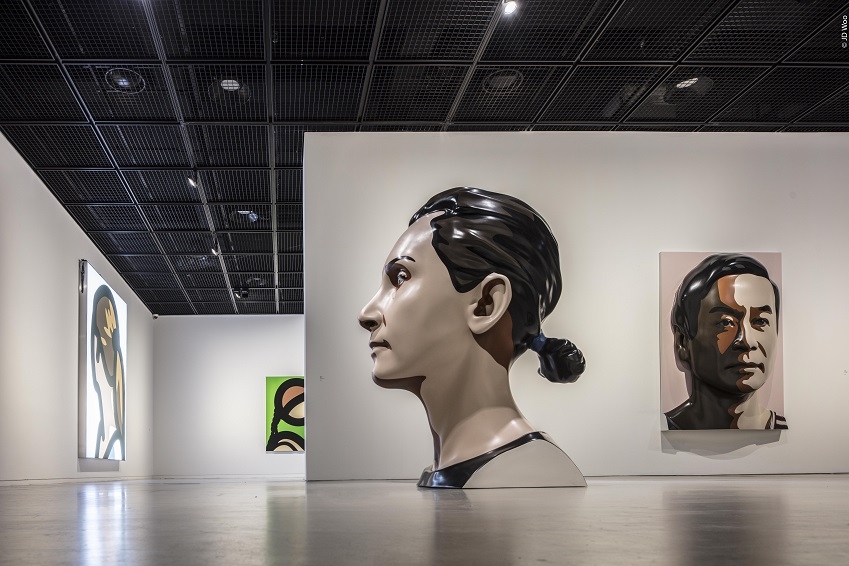 He started drawing people in the mid '80s after a newspaper review said his work "was okay but there were no people" in it. Drawing people suddenly became a challenge for him who believed a subject matter wasn't "so central or important."

"If I am on a desert island, I would probably draw with sand and draw palm trees or sea. If you grow up in a cave or in jungle, you would draw on the cave and draw animals because it is your life and your language."

Then he found himself drawn to the image of walking people, the dynamics of the movement.

"I am looking for ways of putting together a picture that is interesting and dynamic. Walking person allows me this," he said. "Often with walking people, I don't have a face. Because it is not important. More important is the suit or maybe the style of walking. This is how we know people on the street. We do not know their family. We don't know their history. We only know their style and their type. This is nice thing to draw." 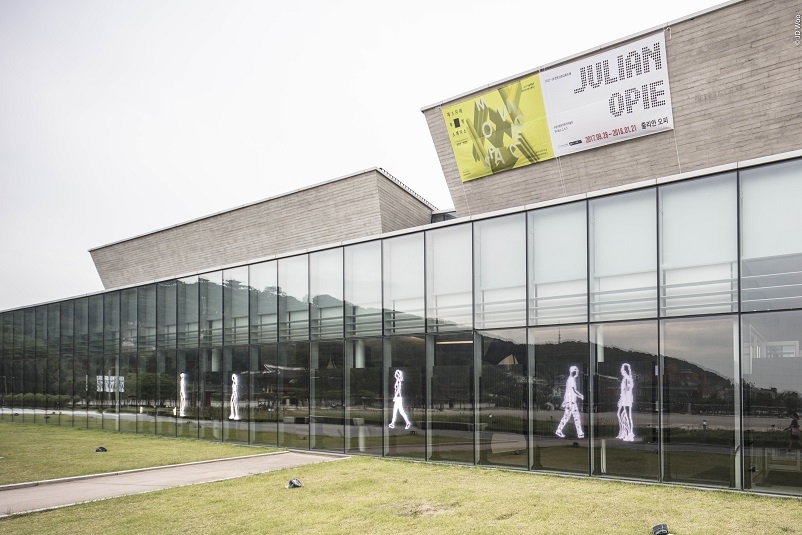 When the usual question, particularly for artists, came up about the source of artistic inspiration, he went silent for a second before he finally said: "What pet do you have? It is much easier" to answer.

"Sometimes I see something and that is the inspiration. I don't want to die without doing something with it. It can be seeing something that brings you above the surface of the water. You can feel alive. I know I sound poetic. I am sorry."

He then further elaborated : "The inspiration can come from so many different places. It surprises you. I can be shopping and suddenly, instead of thinking what I want to buy, I see people dance in front of me."