Chung Eui-young, the chief of the National Security Office, made the remarks during Moon's meeting with the leaders of major parties at the presidential office Cheong Wa Dae, Park Wan-joo, the spokesman of the ruling Democratic Party, told reporters.

Moon and U.S. President Donald Trump agreed earlier this month to expand the rotational deployment of America's key military assets to the peninsula and its surrounding area during their talks on the fringes of the U.N. General Assembly last week.

"The U.S. has pledged to expand the rotational deployment of its strategic assets near the Korean Peninsula," Chung told the political leaders after being asked if there was "any crack" in terms of trust between the security allies.

"(The deployment) will begin as early as late this year, and this will help us expand our defense capabilities," he added.

The security advisor did not specify what strategic assets will be deployed here. Such assets usually include nuclear-powered submarines, long-range nuclear-capable bombers and stealth warplanes. 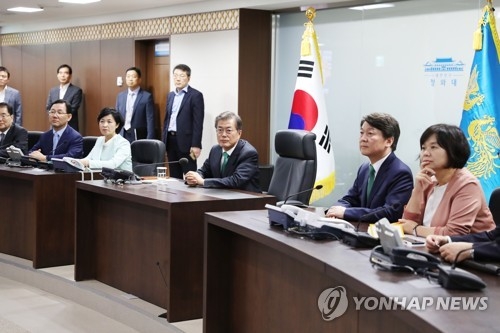 The ruling party spokesman pointed out that Cheong Wa Dae said that Washington has made its pledge on the deployment in writing. He also quoted Chung as saying that the allies' mutual defense treaty entails the provision of all extended deterrence capabilities, including the nuclear arsenal.

Extended deterrence refers to the stated U.S. commitment to defend its ally by mobilizing all military capabilities, nuclear and conventional, against the North's aggression and provocations.

Such a commitment was called into question amid Pyongyang's beefed-up push to develop a nuclear-tipped missile capable of hitting the U.S. mainland. Some argue Washington may hesitate to defend its Asian ally under attack as its military action could put its own territory at risk.

During the president's dinner meeting with the party leaders, Moon stressed that security cooperation between the allies is "watertight," and that from the U.S. standpoint, the alliance with Seoul is of great importance.

His remarks were in line with the claim that Washington needs to cement its alliance ties with Seoul to further boost trilateral security cooperation with Tokyo in a broader campaign to tame an increasingly assertive China.

The president also said he would send a special envoy to Pyongyang "if the timing and conditions are right." But he pointed out that now is not the time for such a diplomatic initiative.